My son is not spoiled

June 26, 2010
Small Talk Six: “6 ways you indulge or spoil your children.”
Join in here. Please scroll down for Weekend Funnies 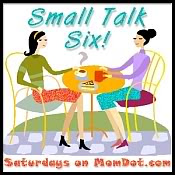 Here's a little case background: Growing up I was as disciplined by my mother as I was spoiled by my father. When I became a mom I chose to employ my mother's parenting style until divorce entered the scene. Full child custody has a price. With caregiving and developmental issues I ended up shuttling my son between 2 countries 5 times in less than 6 years. Through guilt and panic I struggle to make up for my sins >>>

1. There's this rule I set for myself to follow a certain budget each month for all his expenses and NOT to buy anything beyond the budget. But when he suddenly wants a new bike, I break my own rule.
2. It's usually during overseas trips that I indulge him the most. On a cruise in Hong Kong recently, I let him goof with my mini-tiara and play with my diamond ring eventhough I am aware of his penchant for throwing things when bored and he could toss those accessories out the yacht any minute.
3. Echoing no. 1, I buy him a toy I don't expect to buy. At a Victoria Peak shop he spotted a clone of the Ultraman doll he was carrying in his left hand and demanded to have the clone. I gave in to prevent a simmering tantrum.
4. Being a picky eater, sky becomes the limit when there's something he particularly fancies. As he would rather starve than eat what he doesn't like, and I am a lousy cook, I take him to restaurants regularly and let him be the boss over the menu.
5. He dominates my computer; draws monkeys on my research printouts. I close my eyes to work that is put on hold.
6. I let him resist shower, toothbrushing and bedtime longer than I should because I don't have time to argue and heck I need to go to work.
See, he isn't spoiled. God I got homework.
**********************************
Weekend Funnies: Fact of the Week
Join co-hosts Shakira and Gattina 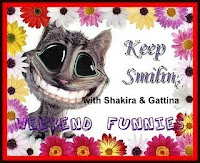 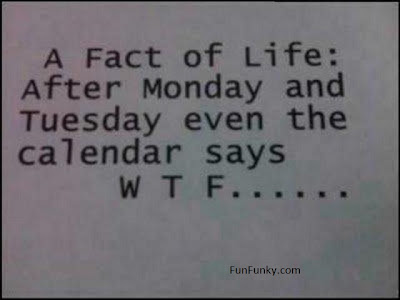 (Thanks again Mareng for this fun)
Happy Saturday, friends!

I hope your son will be well soon.
Jasmine has Nephrotic Syndrome which is a kidney disorder. She had it when she was 18 months then was having a remission for 10 years. So, MIRACLE does happen. It is tough on all of us but accepting the situation makes it easier and more comforting.

I am sure YOU and CJ will be just fine...remember you are never alone?

take care of you?

Unknown said…
Hahahaha...
my youngest has a tshirt that says

"I am not a spoiled brat,
just well taken care of."

and she wears it so proudly too.LOL

Hazel said…
Hi Shakira, so sorry about your daughter but I'm glad there are miracles. Stay strong. Now I see how "You Are Never Alone" is so apt :)

I wonder if that shirt your youngest owns is sold somewhere here. It would fit CJ perfectly :) These shirt manufacturers just know where to hit parents ... lol

Tena said…
the things we moms will do just to keep the peace at time! Great ( and funny) list!

Momma Chick said…
Mine dominates my phone and I always use her as excuses to put off housework. Why clean when you can play?
27 June 2010 at 04:34

Anonymous said…
I think CJ is one of the luckiest little one's around. I say bending rules is norm. That's why rules are in place. To bend and break them if you ask me. Makes life much more interesting that way. But when they are broken there is always the time when you need to follow them and discipline as well. Hard balance. Shoot I'd be at a restaurant every day as well. I'm a lousy cook as well. Get hives in the kitchen LOL. Love the joke. I can't believe I've never seen or thought of that before. Too funny :) Have a great weekend :)
27 June 2010 at 06:35

Hi Katie, guess most kids are nowadays. And she's addicted to pretty things? I want a daughter like that!

Ebie said…
I have to laugh about the days of the week, did not realize that!

Of course, CJ deserves the best, being the only kid! I did anything for my kid, too. hehehehe mantinir lang ta ug no name brands, unya ilaha levis, heheheh!
28 June 2010 at 04:45