December 16, 2009
According to legend, King George II of England rose to his feet when the Hallelujah Chorus was sung. Following protocol his subjects rose up as well. Thus began the tradition of audiences around the world rising during the Hallelujah performace. There are many speculations as to why the king stood or if he even stood at all.
The Bangkok Combined Choir is composed of volunteer singers of around twenty nationalities. Every year in December, the choir performs Handel's Messiah. I sang once. (pure luck: there was no audition in 2000) Rehearsals got me thinking of the tradition of standing when the Hallelujah Chorus is sang. I googled what people have to say and my 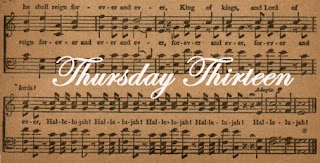 today is a list of opinions about audience decorum during the chorus:

1. The Hallelujah Chorus is like an anthem for the church. Whenever you hear it you are supposed to stand up.

2. Standing for the Hallelujah Chorus just interrupts the performance.
3. People should not be taught that they need to stand up at a certain time for a worship song. It is not about clapping or standing, it is about giving God glory.
4. Standing? It is such a stupid tradition.
5. God made everyone unique. Everyone worships God differently. As long as one worships God in spirit and in truth, it doesn’t matter what they do.
6. If you go to a football game and the national anthem is about to be played, everyone stands up. Why shouldn’t an audience stand for a masterpiece that deserves the same honor?
7. Standing is disruptive to the whole work. It is just dumb.
8. Standing for the Hallelujah Chorus is a splendid gesture for a magnificent work and a nice sign of respect for the choir and musicians who have spent long hours rehearsing it.
9. Look at the sheet music for that opera (sic), if anyone could play something that difficult, it would be great to show him/her a little respect by following the tradition of standing.
10. It is out of respect that an audience should stand for the Hallelujah Chorus.
11. Performances aiming for a higher degree of authenticity usually include request for an audience to remain seated since the tradition has nothing to do with the music.
12. Standing is not a bother at all. In fact people seem to enjoy the tradition.
13. Standing is not a bad thing. Everyone gets a good stretch and it makes for a decent break before Part III.
What do you think of standing during the chorus?
Megan and Janet host

Anonymous said…
Hmnmmm interesting. So your saying that if you had to audition you wouldn't have been in the choir? poor thing. I've never thought about standing really. Just thought it was the appropriate thing to do at times. There again, I don't think I've ever been do the chorus :)
17 December 2009 at 01:10

Hazel said…
Hi Anya, a big hug to Kareltje from us!

Rajesh said…
Wow! You have given beautiful insight inti why such a tradition started.
17 December 2009 at 09:38

Shelley Munro said…
I didn't know about the tradition, but it's certainly very interesting. Maybe they need to tell people beforehand whether they should stand or remain seated?
17 December 2009 at 14:34

Hazel said…
Shelley, during some performances, people indeed are told what to do during the chorus. Sometimes they have it printed on the program so the rendition goes smoothly without interruption of a verbal announcement.
17 December 2009 at 15:45

Hootin' Anni said…
I think I would do the traditional thing...stand. Interesting thoughts you've listed from other's perspectives.

Clara said…
We sang the Hallelujah Chorus in high school choir. Our teacher taught us that the audience should stand. I've always accepted that it was the natural thing to do. I've actually been to a concert where no one stood. It seemed really strange to me.

Mylene said…
We also stand up whenever Hallelujah Chorus is sung in our church to show reverence to our God :)
17 December 2009 at 17:48

orneryswife said…
It has been a long time since I was in a place where it was performed, so I don't remember if I have stood or not. Usually, whether I stand or sit, I sing along. :) Thanks for sharing your list, it was interesting to hear what people had to say.
Happy TT!!
tm
17 December 2009 at 18:25

CountryDew said…
Gosh, I'm afraid I haven't given it any thought!

Journeywoman said…
When I'm in the choir performing it I always enjoy it that the audience stands. When i'm listening to it, I kind of get annoyed because it takes me out of the rest of the performance--if it's part of the whole Messiah. If it's part of a choral concert then I have no opinion

Unknown said…
Very insightful. I would follow tradition because I think there is something heartfelt and meaningful behind it.
17 December 2009 at 21:45

I am Harriet said…
Interesting stuff- who knew?

storyteller said…
Interesting information ... timely in light of a Hallelujah Chorus related post I shared at Happily Retired Gal earlier this morning. Like Willa, I'm feeling a bit confused about whether to stand or sit. Happy T-13 ... mine's at Small Reflections this week ;-)
Hugs and blessings,
17 December 2009 at 22:46

Lisa notes... said…
Hmmm...an interesting dilemma. I didn't know it existed, but obviously there are lots of opinions on it. I'd love to go to a performance and find out what our local audience does here.

Julie said…
Great thoughts. I tend to agree with standing. As a past choir member I always saw it as a compliment and that it was praising God. Love your Thirteen and I have mine up too if you want to visit. :)
18 December 2009 at 01:04

Susan Helene Gottfried said…
I never heard that people ought to stand for the Hallelujah Chorus. Interesting.
18 December 2009 at 10:16