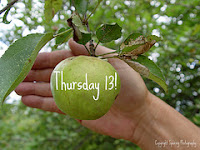 A BBC meme asks how many of the 100 books of a list they published have you read.  Library Thing comments that "the BBC apparently believes most people will have only read 6 of the 100 books."  It's probably true to me. While I read two Harry Potter books and Da Vinci Code twice, I managed only parts of numbers 7-13 on my list: (Library Thing link has the complete list; see how many have you read)

Unknown said…
I've been reading Jane Eyre - Charlotte Bronte for over a month now. It puts me to sleep after a chapter lol Some classics there, for sure.
Happy T13!
29 September 2011 at 11:09

CountryDew said…
I went to the list and I have read 36 of the books, and parts of others, such as Shakespeare and the Bible. But I read a lot and many of them I read in high school and college. I think the important thing is to read, period.
29 September 2011 at 22:49

Ebie said…
These books are classic and well read.

Hehehe, now that I am a golden girl, reading makes me sleep, no offense....