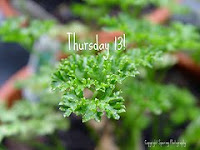 This is the second half of lines to make you smile (according to the subject heading) I posted previously from my inbox. Feel free to react :)

1. The original point and click interface was a Smith & Wesson.

2. Consciousness: that annoying time between naps.

3. Ever stop to think, and forget to start again?

4. Being 'over the hill' is much better than being under it!

5. Wrinkled Was Not One of the Things I Wanted to Be When I Grew up.

7. A hangover is the wrath of grapes.

8. A journey of a thousand miles begins with a cash advance.

9. Stupidity is not a handicap. Park elsewhere!

10.They call it PMS because Mad Cow Disease was already taken.

11. He who dies with the most toys is nonetheless DEAD.

12. A picture is worth a thousand words, but it uses up three thousand times the memory..

13. I smile because I don't know what the hell is going on.

I am Harriet said…
Yes! Procrastinate now! Love it :)

Heather said…
I heartily agree with numbers one and nine.

Thanks for visiting my garden post. It was interesting to learn that you call green beans "Kentucky beans"!
20 August 2010 at 03:28