One night when Cj was in Pinas, my mother rushed him to the hospital because he just wouldn't stop crying. When the doctor started examining him, he became quiet like he never cried in the first place. They could not find anything wrong with him. False alarm. They went home.

The rest of Cj's visits to the doctors, are purely routine checks, except for an ear infection when he was about five months old. We had him treated at Samitivej Hospital. I hated the way the nurse pricked Cj's finger for a blood sample. She wasn't gentle. Cj has a fairly high tolerance for pain, but his cry told me the prick was agonizing. The lancet left a messy mark virtually wider than his fingertip. As if it wasn't enough, the nurse wrung Cj's finger roughly against the vial, his cry sent my entrails lurching. Although I put on a brave front, I was freaking and ready to strangle Little Miss Nurse-from-hell.

Samitivej is state-of-the-art. Why else did we take Cj there? But maybe there is always one Nurse Ratched in every hospital. So that's a lesson for me and maybe for other inexperienced moms: Do not pick a hospital just because its lobby could be mistaken for a five-star hotel. Duh! Next time I'll be wiser.

Alright, on with gorgeous doctors who do their job quite well. They are some of God's most awesome creations; society's essential members. 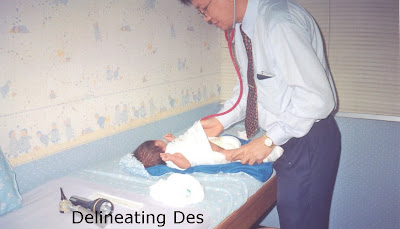 This is Cj's first vaccination. Right after the doc pulled off his steth, Cj fountained a pee on doc's poor shirt and tie. 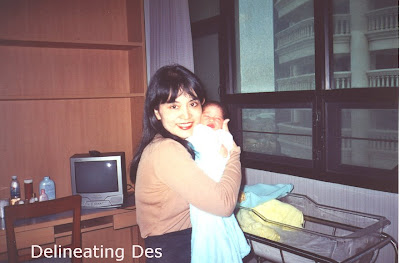 Dr. S, my OB-Gyne, and the doctor who delivered Cj. 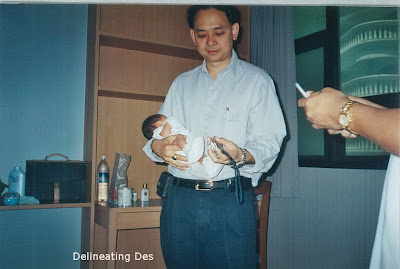 And this doctor is on stand-by. He's proven himself major at the World Congress for Pediatric Dermatology, let's leave him alone with his techno-gadget and trust him with Cj in his arm like that :-). Ex-mom-in-law watches him avidly on Thai TV (starstruck mom). You may wonder how the heck did he end up in a maternity ward. Well, he is Cj's uncle and a specialist at the hospital where Cj was born. That pair of hands on the right is Cj's dad's. These two brothers are in my room busy contacting family hours after Cj came out. And I was busy welcoming myself to mommyhood!

SASSY MOM said…
I would really freak out too if that happened to me.

Beth said…
"Do not take your kids to a hospital just because its lobby could be mistaken for a five-star hotel." -- I laughed out loud here too!

Chris said…
what an experience..

Hazel said…
@ Sassy Mom and Beth, that's what happens to moms (like me, more like heheh) who have a combination of shopping, vacation and freaking guts on the way to the hospital.
3 May 2009 at 19:34

Hazel said…
@Chris, thanks for visiting back. Luckily I didn't throw the negatives of those photos, or I would have grappled for more words to tell about Cj's other hospital experiences.
3 May 2009 at 19:42

Hazel said…
@Beth Moreno, maybe that nurse was having a bad day and took it out on an innocent baby. If she performed her job that way regularly, I'm sure sooner or later someone would complain. Let's hope she gets corrected and learns a lesson on empathy not at the hands of a mom who will really wring her neck, and not just imagine a strangle like I did.
3 May 2009 at 19:56