It's Dad's turn huh...*chuckle*.... I actually opened some drawers to see if I can find CDs that contain photos of Cj with his dad. Nothing left. Those huge albums of Cj's first year - containing lots of shots with his dad starring in them are in Pinas. I'll make do with the ones I have right now. 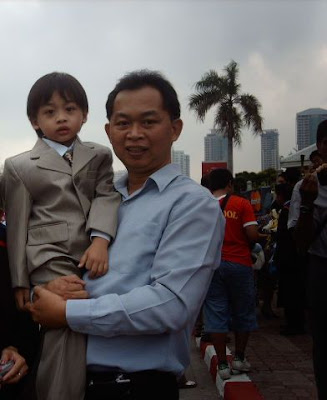 This was taken during my graduation. Boring, I know. But I invited him because no. 1 - he financed the study, international gradschool does not come in cheap, show some gratitude, girl :-); no. 2 - he is my son's father in spite of everything. We may not be living under the same roof but as far as Cj is concerned, this Ex is a good dad. When we were together, he used to come home from work at 9PM the earliest, but when Cj arrived there was a miracle on our street - by 6PM his car is already parked in the garage!

Cj's dad is a hard player in the corporate world. Always in deep concentration on his job, I'll be damned if I rang him unless it's about his son. When I dare call him, all I have to do to avoid armageddon is drop his son's name and I "get away with murder." Ex is terribly devoted to his work, a tough, unforgiving, rock n' rolling executive nobody can crack. If there is any consolation in that reality, it should be that he also tries his best to play his role as a dad. (TH in our lingo, ops) 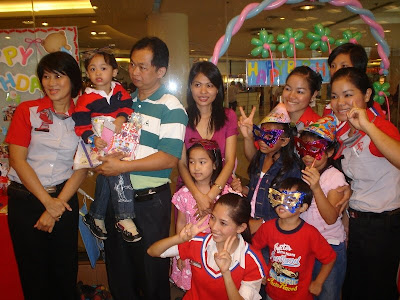 He gave up his Sunday round of golf to attend Cj's birthday. (He had to or I would have killed him :)) He does show up in all of Cj's major activities, and I get teased over and over by family and friends during times like these - you know the usual silly hope of loved ones for two pathetic people to possibly get back, knock on wood, lol! Under the circumstances, the game will have to be played this way. I do my part as a parent, and he does his. While I am pleased with the fact that Cj's education fund from nursery to university is already secured by his dad, I appreciate the time he spends with Cj more than anything.

he really looks serious no.. hehe

at bat ganun may knock on wood effect LOL

CHE-CHE said…
hi hazel! thanks for dropping by my site :)

Beth Moreno said…
ang formal naman ng son mo...parang i want my son to have a pic like that...haha!

Hazel said…
@Rona, i'm glad being a husband and a father can be separate roles.

@Beth Moreno, i would think your son would surely look great in a suit :)

elapot said…
sorry for the late visit... anyway, your circumstances may be different, but one thing's for sure, dad loves their kids the same way we do :)
29 April 2009 at 22:23

Chris said…
Hi! thanks a lot for posting this and sharing with us your story :) daddy moments are really important to our kids :D
1 May 2009 at 00:32