Of short heights and thrones

February 02, 2010
The few visitors in the throne hall of King Narai's palace were leaving when I got there. Pleased with the solitude, I lingered. The quiet seemed to usher in an opportunity to commune with the spirit of the ruins, however fleeting it was. As with usual thrones, this one is elevated. One suggested attribution is the king's short height. Over at his palace King Narai had ambassadors of France's King Louise XIV whose practice of wearing high heels was hypothetically due to his being not very tall. There might have been some influence or connection there.

Whether these kings were short or tall, records show they certainly occupied thrones. This is the Dusit Sawan hall. Imagine King Narai going up the steps to sit on his throne. I tried climbing. It was uncomfortable, but then I'm no king. 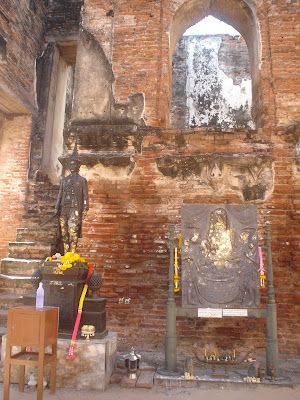 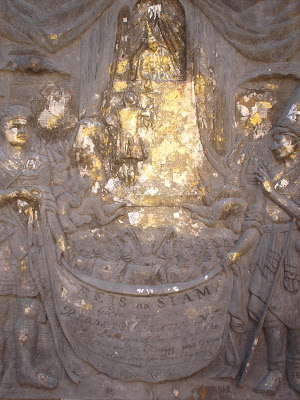 I ambled behind the throne which was like playing hide n' seek with whatever friendly ghost was left in there. The ruins still exuded so much character. Numerous climbs must have happened on this flight of stairs before the roof went off to reveal that sole flier in the vast blue above. 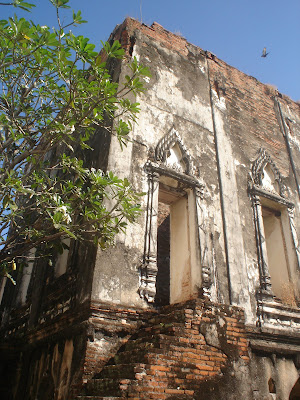 Then I proceeded to the living quarters of the king's many wives....

is brought to you by the MyWorld team:
Klaus Sandy Wren Fishing Guy Sylvia

Sylvia K said…
What an interesting tour! Thanks for taking us along! Love your photos and your text -- makes the pictures really come alive! Enjoy your week!

Indrani, it's in Lopburi outside Bangkok

Anonymous said…
That throne room must have been very impressive and majestic once upon a time...
2 February 2010 at 15:05

Victoria Tsavdaridou said…
Thank you so much for these information, I always like learning about knew places!!! Your photos are beautiful!!!!
2 February 2010 at 15:23

ksdoolittle said…
You are a very gifted writer! Your words and accompanying photos made learning a little history most enjoyable. I hope there's more! Thanks for visiting my blog and leaving such a nice comment. ~ks
2 February 2010 at 20:08

Carver said…
Very interesting post and great shots. The King would get plenty of exercise climbing the stairs to his throne. Remarkable place.
2 February 2010 at 22:29

Ebie said…
I always wonder, if the wives know each other, haha!

Anonymous said…
WOOT...Boy you go away for 1 week and everything changes. Like the new theme my friend. I love this my friend. Very well done and so interesting :)
4 February 2010 at 05:00