i. Refund. The business office refunded my visa problem expenses. I had to pay the fine but they took care of everything else which was a pleasant surprise as I didn't expect them to and I already conditioned my mind to face a few deprivations. A colleague who is privy to the vice president told me, "They refunded you because they need you." I don't know whether I should believe it. Foreign employees are sometimes treated like necessary evil around here. But well, it's the refund that's the fave.

ii. Foggy mornings. I counted two early mornings of fog. I could not see buildings 2 minute-walk away. The illusion of cold made me smile.

iii. Bible Heroes, Ceejay's new DVD interest. He never wanted to watch it when he was 3. I'm glad he's back to christian stuff. For now it's goodbye, Buddhism.

iv. Phone conversation with Mama. Mozart's (on left side bar below Ceejay) christmas treats were delayed because the ATM would not release cash. The situation dragged on until the other day. Mama said Mozart was already sulking. When I had it sorted, the bank computers said an incorrect PIN was entered 3x. Mama had to admit she pressed the wrong numbers after insisting she didn't. I teased her that someone was worse than I when it comes to forgetfulness. The conversation lightened up even more when I asked her what's the sound in her background and she explained that she was at Mrs G's attending a party. "Oh... say hello to my MIL that never was," I mused and it was her turn to tease me. We ended up laughing like silly girls. 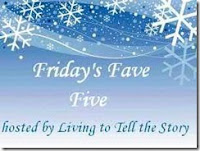 More faves at Living to Tell the Story
****************************************************
Mommy Moments: Newborn Days
(Please scroll up for Friday's Fave Five)
Ceejay was born on a Sunday. I went shopping on Thursday that same week. I had so many unanswered questions about mothering that I just had to get out to see if the world was still right. The answers I relied on were only those by Dr Spock in written form and from overseas calls to my mother in PI. Then there were those unread gradschool books that I had to stare at before classes resumed the next week. It was a bit chaotic.

But I have to admit those days were fun and exciting, and I wouldn't exchange the experience for the world! We had breastfeeding issues and Ceejay had to be bottlefed. A few days from the hospital I had these moments with Ceejay where I thought of printing lip marks all over his face before giving him a bath. I used my phone to capture the lipstick job which was erased as he moved too much. 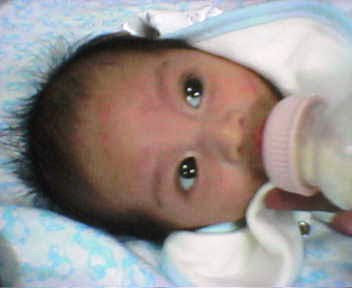 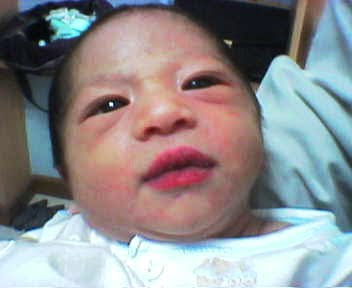 and with me a few more days later. Is it obvious that a few minutes before this shot was taken I had a little accident in the garage? It happens when you gallivant through hammers and wheels in high heels. But there were sleepless nights to brace myself for so I had to regain the poise at once. 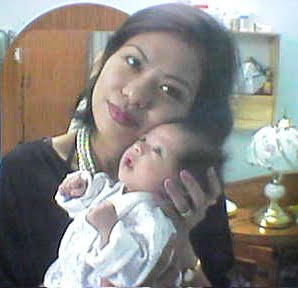 at the Mommy Journey

Anonymous said…
This is one of your best Mommy Moments to date. What cute photos. And I can so picture the kisses. Just wonderful.
15 January 2010 at 07:43

Jac said…
Nice photos mommy. I love the quote you express here like
"I have to admit those days were fun and exciting, and I wouldn't exchange the experience for the world!"
Happy weekend hugs!
15 January 2010 at 11:10

anne said…
I haven tried the lipstick marks both of my daughters becuase I was too paranoid of giving them allergies wahhh I so miss that lipstick thing, i bet it was funny mine is here http://annebianca.com/2010/01/mommy-moments-newborn-days.html thanks
15 January 2010 at 12:59

Mommy Liz said…
Our kids are so precious, that no matter how hard the whole duration of pregnancy was, we won't have any doubts of doing it again and again and again. I have 4, so..

Enchie said…
super sweet naman with the lipstick mark :)our newborn days are to be cherished talaga, we cross this path once for every little angel who will come.
15 January 2010 at 21:06

Melli said…
That was a GREAT Mommy Moment! Sweet memories for sure!

3 CHEERS for Ceejay's new DVD choices! I wish getting rid of Buddhism was sO easy with a 32 year old! Maybe I should give her Veggie Tales! Having Ceejay fulltime is already proving beneficial! :)
15 January 2010 at 21:09

ellen b. said…
Some great faves and wonderful mommy moments. I love that you enjoyed those foggy moments!! Hope you have a wonderful weekend.
15 January 2010 at 22:16

I'm glad your visa issues were sorted out in the best way possible for you.

Love foggy mornings. Fog enthralls me. It's so mysterious. And it's sorta amazing to think fog is really a cloud sitting down on the ground. The thought that I'm walking or driving through a cloud is somehow really cool.
15 January 2010 at 23:04

Carrie said…
My son is three also. I LOVE this age! I'm so glad you have your little boy to enjoy.

Marice said…
how cute! :) love that red lips of your angel!

Brenda said…
I love the way you say the fog created an "illusion of cold". Those of us who have lived in warmer climates know you sometimes want that cold, even for just a little while.

storyteller said…
Sweet baby pictures and lovely FAVS here ... thanks so much for sharing both. Glad you got the Visa thing sorted out.
Hugs and blessings,
Small Reflections
16 January 2010 at 05:26

Lisa notes... said…
Isn’t it nice when you get an unexpected refund?

Chris said…
your photo with Ceejay is beautiful! :D i really love looking through newborn pictures.. it brings back great memories, doesnt it?
16 January 2010 at 21:54

Kari said…
what a cute babe and some great mommy moments.
Love the Bible hero interest and how you say it's Goodbye to Buddhism, for now.
again lovely photos and thanks for sharing.
16 January 2010 at 22:39

darly said…
your baby is such an angel ;)

Tetcha said…
Didn't we all moms went nostalgic remembering our kids' newborn days? Those are certainly one of the most stressful but certainly beautiful moments in our lives as moms. Happy Mommy Moments!
19 January 2010 at 15:00