If I wrote a note

There's a twin issue currently hovering above my a** - a son diagnosed with PDD (Pervasive Developmental Disorder), and an ex-hubster who plays hardball about all this. I shoot questions and need answers.  Unfortunately this reality takes time to be sorted and moments trying to penetrate the core for possible solutions could seem frustratingly non-existent. At times I fancy communicating with a deity like this -

XmasDolly of XmasDolly, Lori of Shewbridges of Central Florida, Larry of Cakeblast, and Callie of JAmerican Spice

*****
Q1. Do you think Twitter is taking over as the 'social media tool of the moment' (replacing Facebook who replace MySpace)? It has its purpose to people, just like FB. Determining whether is has taken over as the "social media tool of the moment" could be partly based on the stats which I haven't checked so in playing this by ear - nope. I don't think it's taking over exactly.
Q2. What are your thoughts on the one year anniversary of the Gulf Oil spill?
Verifying facts before forming opinions is as important as its effect on us. That the BP top guy - Tony Hayward is a Phd (Geology) at 22 intrigued me but it has yet to be checked against that honorary something Edinburgh U conferred on him. No time to do that further. A question mark forms in my head on:

The offshore drilling in the Gulf approved by the Obama administration features the same blowout preventers that we now know are prone to blowout. The safety report from BP that is cited in these latest applications is dated 2009, before the Deepwater Horizon failure. This failure to enforce standards is unsurprising in an industry where the “impartial” regulators have significant connections to lobbyists. McGill Daily

Q3. What combination of items, that people will sometimes use, should never be used in making a sandwich in your opinion?  Everyone has different tastes. No olives for me.
Jonas is a vampire too? God, where was I all this time.... 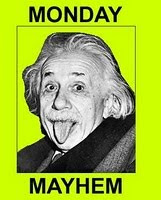 Anonymous said…
I love that Musical Monday video. It is awesome and I think so appropriate. No Olives huh? Hmmm Such a good point on BP. Do you remember how long the Exxon Valdez was in the news? This just dropped off the face of the earth it seems like. Odd.....
4 April 2011 at 12:08

XmasDolly said…
whoa! That young lady has the most powerful voice I've heard in a long time! That was magnificent. Great choice. Thanks for playing along with us today, and we hope to see you next week too!
4 April 2011 at 13:17

Run DMT said…
Very powerful song and I can see why you chose it. I had to Google PDD to understand what you were dealing and my heart goes out to you, mama. Sending you many prayers of comfort and answers to get through these difficult time. (((HUGS)))
4 April 2011 at 20:43

Anonymous said…
What a fantastic song! I'm sorry to hear what you're going through! Hope things get easier! x
4 April 2011 at 21:55

I am Harriet said…
A couple of great video choices indeed. I think the lobbiests are the worst influences out there.
Thanks for playing and have a great week.
5 April 2011 at 04:14

Classic NYer said…
That girl has a crazy powerful voice, doesn't she? Definitely star material, I think. Why don't i hear more from her?
5 April 2011 at 07:24

Hazel said…
She's new on the block; all over the world in concert with David Foster and his proteges
5 April 2011 at 08:25

Colette S said…
Wow!! I love it. Such a great voice.

Amanda Moore said…
What is the scoop on that little power house I wonder she is amazing!Sorry about your son and the issues with your ex I have been down that road,I know it sounds corny but it does make you stronger and in the end you'll win because you know you did best
(((((hugs)))))
Amanda
5 April 2011 at 23:34

July 15, 2010
I'm riding along Mommy Moments this week; my first post in months. I miss this meme, the kids' photos and the mommy chats. Alrighty here's CJ eyeing the next ride... This was some space capsule if I remembered it right - Everytime I fasten CJ on a helicopter, I daydream of my very first experience with aircrafts. I was his age. A helicopter with a bride on board flew low over our neighborhood dropping us bunches of red bougainvillas. To this day that beautiful spectacle remains alluringly fresh in my mind. For CJ I like to think this ride symbolizes a limitless sky he could soar into. I love the sensation of holding and releasing my breath watching him take off, and hoping he will be just fine. Check out more kids' rides at The Mommy Journey .
19 comments
Read more

November 15, 2011
The Rumford is a much more efficient way to heat a room than earlier fireplaces.... ( Wikipedia on Benjamin Thompson, Count Rumford, designer of tall, shallow fireplaces which are now known as the Rumford, was an Anglo-American physicist known for his investigations of heat) Living in the tropics, I have been in close proximity with only three fireplaces in my life. There was an unused one in the home of my college professor in the Philippines. The other one from which I could feel the heat and see the fire dancing was in a hotel lobby in the Yorkshire Moors. Picture taking was quick. Two old ladies were having tea by it, but that was my first ever real fireplace experience, and I loved it. The latest I have touched is the one in Jane Austen's imaginary Northanger Abbey. The fireplace, where she had expected the ample width and ponderous carvings of former times, was contracted to a Rumford , with slabs of plain though handsome marbles, and ornament over it of the prettiest Eng
17 comments
Read more