Mommy Moments: School is out

Too early. That is what I think of Ceejay's schooling. Too late. That's what his dad thinks. At 3 I just know Cj is not ready for school. His dad was having none of it and enrolled him in a chinese school near his condo. The so-called first day of school was big for the ex. He was proud. I went to work like normal. That evening the yaya reported that the gf came along to help send Cj off and she ended up becoming the driver. I LMAO. More news: Cj screamed all the way to school and back. A tete-a-tete with the ex was in order.

I reminded him of his little nephew who came home exhausted from school, dropped his schoolbag on the floor and announced, "I hate school! I want to retire!" The amused uncle (ex's older brod) asked, "and what will you do if you were allowed to retire?" The poor boy answered, "I will go to Europe every month just like you do."

Back to the tete-a-tete: like the rest nothing much came out of it. Cj is again enrolled in another school. A Thai this time. I did join ex so Cj will have both parents launching him off to yet another first day of school. Good facilities. Rich curriculum. Correct teacher-student ratio. My conclusion: The school is ready but Cj is not, even at 4 then and now 5. Ex moaned about Cj's low marks on, of all things, his coloring book. I wanted to say, "I told you" but held my tongue. If I were the one forced to go to school, I would flunk every subject there is. Cj didn't. I wanted to celebrate by giving him as much time as he wanted to play and sleep.

My mommy job has just doubled. Not that I am complaining. Whenever possible I expose Cj to church-run classes once a week, and I like it. At least he does not scream on the way there: 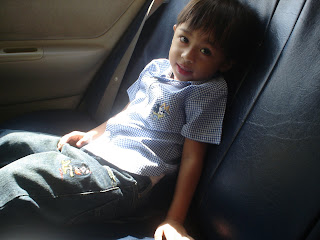 And there are no low grades to get hurt about. Just a little consolation from the evidence that he participates during sessions: 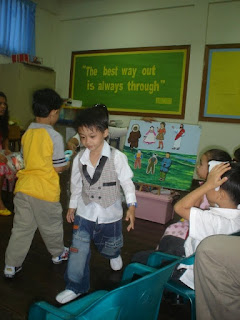 And little joys derived from answering his questions about characters from his lesson book: 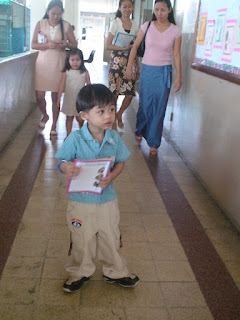 Talking about lesson books, I haven't placed my order for the latest issue. They are shipped from the US every quarter. That said, my job has tripled. Meanwhile, Cj's dad has just finished outlining plans for school next year. Good heavens, everyone is rushing.
Visit The Mommy Journey to see more participants.

Tetcha said…
You're right about not rushing things for our kids. Learning should be fun for them so they don't get traumatized.
26 June 2009 at 08:34

Mauie said…
I very much agree with you as I am a teacher too. I have had kids as young as 3 years old with parents begging the school to add their children even if they are a little underage. If the child is enthusiastic, we include him in the Nursery class. There's no point in forcing a child to go to school when he's not ready yet.

Happy Thoughts said…
That's precisely the reason why I balked when my in-laws suggested that my son go to school at age 3. I know my son and I know it wasn't time and I was right. Now that he's four he loves going to school and I don't have a hard time preparing him to school every morning. Here's my entry: http://www.happythoughtshappytot.com/2009/06/mommy-moments-school-days.html
26 June 2009 at 13:42

Clarissa said…
Yap,very well said!!School must be enjoyed and needed not to be rushed.He will cope with that eventually^_^
Nice meeting you and CJ at MM!!and thanks for dropping by,too!!^_^
Have a great weekend to you and your family!!^_^
26 June 2009 at 13:45

MoM from Manila said…
I agree with you, school should not be a rush so kids will enjoy the process of learning.

mine is up here;
Mommy Moments: School Days

Sarah said…
that's true, no need to rush, there's always a time for everything. A season for every activity under heaven.

Few years back I remember, when we were still in the Phil. and my son was still in kinder school. The christian school where my son was enrolled, they found out that children who attended school early like 2-3 years old were easily bored in their studies when they reached 10 or 11 years old. Unlike children who started school at the right age.
26 June 2009 at 14:08

rossel said…
I don't believe too in rushing our kids. My daughter went to school at an early age but in her own will. She said she wanted to go to school and that she's ready. We let her and she passed.

jeng said…
Sometimes I am pressured to force Joaqui to go to school because my friends' kids are already in school, but then when he's not ready, he's not. School can wait anyway. ; )
26 June 2009 at 21:56