Thursday Thirteen: And the credit goes to...

Header from Samulli
Ever wondered where do famous quotations really come from? How about wondering how did they come about or who really said them? Truth be told, I did not wonder. Not that I assumed everything's perfect in the business of quoting and quotations, I just trusted the language I'm reading and listening to as embellished enough. But I did have fun finding out that certain quotations or attributions did not really originate from whoever they are famous with or how the media present them to be. 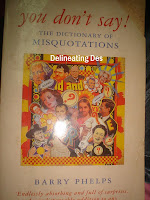 1. According to Jack Freedman, 'A piano is a piano is a piano' was written by Gertrude Steinway. Ms Stein is also credited with the phrase 'A lost generation', but this, she always admitted, came from a Monsieur Pernollet, a hotelier from Belley, who referred to a mechanic fixing Ms Stein's car as on of "Une generation perdue'; those whose formative years had been spent at war. Ms Stein applied the phrase to Ernest Hemingway and his circle and Hemingway quoted her in The Sun Also Rises. Ms Stein is said to be a woman of maximum output and minimal vocabulary. She wrote of an English painter Sir Francis Rose, 'Rose is a rose is a rose', commenting on the rosiness of Rose rather than the rosiness of a rose. (p.143)

2. William Shakespeare. The immortal Bard, the Swan of Avon, the Wonder of his Age et cetera, well some of his greatest lines are not by him ( not even by Francis Bacon, Ben Johnson or whoever else might have written his plays and sonnets). Both 'Off with his head, so much for Buckingham, and 'A horse , a horse. My kingdome for a horse' in King Richard III (Acts IV and V) were interpolated by Colley Cibber - actor, playwright and Poet Laureate - when producing those plays. (p. 134)

~ and I thought 'Off with his head' was put by Lewis Carroll (Alice in Wonderland) into the mouth of the Queen as her favorite solution to the problems in her kingdom, lol.

3. John Milton is a poet more quoted than read. Milton's best-known adage is 'Revenge is sweet', but his actual lines were: 'Revenge at first though sweet/Bitter ere long back on itself recoils.' (p.102)

~ I did notice this saying in elite schools, and maybe in the not-so elite ones.
5. Margaret Thatcher, British prime minister, while possessing many unique political talents, was denied the gift of memorable phrasemaking, and her English is utilitarian. Her quotable remarks only achieve their status from her status. 'I am extraordinarily patient, provided I get my own way in the end', would not be noteworthy from the chairwoman of the Grantham Women's Institute. Her only great phrase 'You turn if you want. The lady's not for turning', was written for her by the playwright Sir Ronald Millar. ( p.147)

~ And I thought of only Thatcher (after Blair), and how glamorous she is in those events digest magazines in school a long time ago, while taking photos in front of 10 Downing Street in 2006 :)

6. Sir Walter Scott, appropriately named Scots poet and novelist; know that their national novelist coined 'Blood is thicker than water' which occurs in Guy Mannering (1815). Americans know that the words were coined by Commodore Josiah Tattnall in 1860, to justify his assisting a naval squadron off the China coast. The impartial scholar knows that the phrase appeared in Allan Ramsay's Collection Of Scottish Proverbs of 1737 and was old then. Euripides's Andromache who used the phrase in 426 BC may not have been the first to do so. Blood has a specific gravity of 1.06. It is thicker than water by a specific gravity of 1.00 (p.134)

7. Frank Ward O'Malley did not coin the aphorism 'Life is just one damn thing after another', it was Elbert Hubbard, the American disciple of William Morris and founder of Roycroft Press. Edna St Vincent Millay's emendation was: 'It's not true that life is one damn thing after another - it is one damn thing over and over. At least both are less discouraging than Life's a bitch. And then you die. Damon Runyon got the balance right: '"In fact", Sam the Gonoph says, "I long ago came to the conclusion that all life is six to five against.'" (p.111)

~ I am thinking of Life is a beach :-) ; and also Hagrid talking about his father in HP and the Goblet of Fire, to Madam Maxim, "and then he died."

8. Charles Darwin discovered the principles of natural and sexual selection, but is also responsible for, at least indirectly, the bugbears of 'creation science' and social Darwinism. His writings and theories have always been subject to distortions and misinterpretations, from their first publication to the present day. The most dramatic fabrication has to be an account of Darwin's final words which, according to a certain Lady Hope (conspicously not present), were: 'How I wish I had not expressed my theory of evolution as I have done.' Refuted by his family, this recantation of his life's work continues to be used as ammunition by fundamentalists and evangelicals in their crusades against secular humanism. Nor did Darwin coin survival of the fittest. As he wrote; 'The expression often used by Mr. Herbert Spencer of the survival of the fittest is more accurate and sometimes more convenient. (p.44)

9. Oscar Wilde, Irish playwright, poet and (unbeknownst to himself) pioneer gay rights campaigner. 'Work is the curse of the drinking classes' is a classive Wilde aphorism, but the earliest trace of it is in Mr. Hesketh Pearson's 1946 biographyof the great auesthete - thus being too late too appear in Mr Pearson's Common Misquotations, published twelve years before. This epigram turns the old temperance reproof: 'Drink is the curse of the working classes', but that saw is absent from all the volumes of quotations I have consulted. So either compilers of such books have long been an egalitarian crowd, or a bibulous one. (p.161)

10. The sentiment 'It doesn't matter what they say as long as they spell the name right' is odd. All civilized societies have laws of libel just because it does matter what they - usually the press - say, especially when they spell the name right. However a publicity-averse recluse is less likely to have his aphorism in lexica of quotations than, say, George M. Cohan (entertainer, closely associated with Broadway's theatreland). The maxim has been attributed to President Roosevelt, although nobody seems sure which one. In 1985 David Owen, then leader of the social democrats, said desperately: I don't care if you criticize us, agree with us or disagree with us. Just mention us, that is all we ask.' John Wolcot (1738-1819), writing as Peter Pindar, expressed it better and first: What rage for fame attends both great and small! Better be damned than mentioned not at all. (p.39)

11. Napoleon Bonaparte is not the father of: 'God is always on the side of big battlions', but only the step-father - are as most great generals, all of whom have noticed this little idiosyncrasy of the Almighty's. The earliest record of the sentiment is from Tacitus (c. 55-120): 'Dius fortioribus adesse' which, being latin, is the pithiest. Fredercik the Great echoed: 'Dieu est pour les gros escadrons', and so have many other scholars at different times and in different languages and at different times. Frederick's adviser, Voltaire, cautiously prefaced the remark with the caveat 'on dit que...' ('it is said that ...'). Oliver Cromwell took a similarly prosaic view on keeping one's powder dry. God's partisanship was not restricted to land; Gibbon noted: 'The winds and waves are always on the side of the ablest navigators'. (p. 108)

12. Adolf Hitler, the paradigm of charismatic evil. Hitler's demands for 'Lebensraum' - living space' for the German people, prompted the belief that he coined the word. He didn't. He expropriated it from Professor Karl Haushofer who developed the idea from the Swedish geographer Rudolp Kjellen's concept of 'geopolitics' which was, in turn developed from the ideas of a German, Friedrich Ratzel, who concluded that 'a state, like all other living entities, must either grow or die.' (p.73)

13. Mark Twain merely had to quote other writers' work and then let posterity do the rest. Thus 'There are three kinds of lies: lies, damned lies and statistics' is attributed by Twain to Disraeli and has ever since been wrongfully ascribed to Twain - or not. Nobody has been able to find any source for this remark other than Twain. (p. 150)
Source: Phelps, B. (1995) You don't say: a dictionary of misquotations and misattributions. UK: MacMillan.
Play here.

Hootin' Anni said…
#7 I too first thought of Life is a Beach when I began reading the whole thing...

love, love LOVE this!!! Very interesting. Lots of research went into this.

Janet said…
I, of course, love that you worked Harry Potter into this list :-)

I leaned so much now :d