An episode of the ancient sanskrit epic, The Ramayana, called Khon Prommas or Prommas Masked Drama was on exhibit at the Bangkok Arts and Culture Center last year. Khon masks represent aspects of crown, headdresses and other elements of royal costume. Throne halls occupied by various gods and demons are depicted in a khon drama episode. 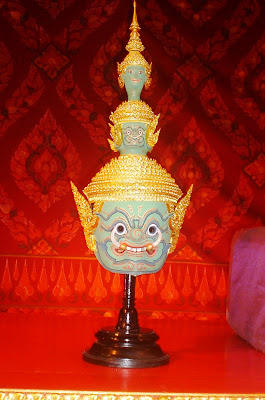 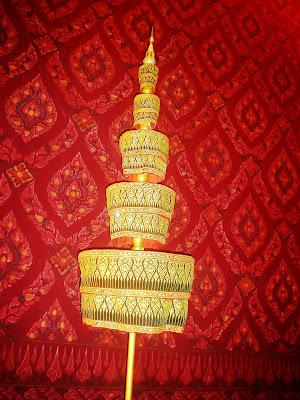 One objective of the exhibit is to preserve forms of craftmanship related to the performing arts such as Khon itself. It is also for the general public to learn more about the production of a khon drama. The exhibit was part of a year-long 80th birthday celebrations for His Majesty King Bhumibol. 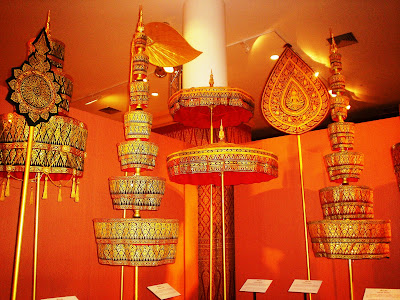 That's My World Tuesday is brought to you by the MyWorld team: Klaus Sandy Wren Fishing Guy Sylvia

Sylvia K said…
What beautiful and colorful exhibits! And your photos are terrific! Love the information that you include -- makes the pictures even more interesting! Hope you have a great week!

Anonymous said…
So much history and so beautiful reminders of that glorious history.

Anonymous said…
Its so vibrant and colorful. Thanks for sharing this and telling us more about your world. Truly amazing.
9 March 2010 at 11:42

Unknown said…
Beautiful, the colours are striking.
You asked about the photo in my header: I took it in Bodie, California. It's a former mining town that was abandoned and now is a ghost town that gets preserved in a state of "arrested decay". It's definitely worth a visit. Wikipedia has a good article with really gorgeous photos
9 March 2010 at 13:17

Ebie said…
What a beautiful exhibit! They have well preserved them!

Carver said…
This was a fascinating post and wonderful works shown here.
9 March 2010 at 22:27

Amanda Moore said…
Stunning artifacts, my boss would love this as well, she is from Thailand and goes back home whenever she can......
10 March 2010 at 01:56