A friend on the other side of the world mentioned this place. I discovered it's right down my backyard when I googled it. Since a co-old maid was game for a little exploration we went there last night. The name of this restaurant is apparently its most attractive feature. 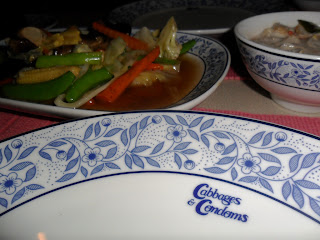 We punctuated the food with conservative-wild observations of 21st century old maidenhood. Ah, there's my Screwdriver. Reliable in penetration. 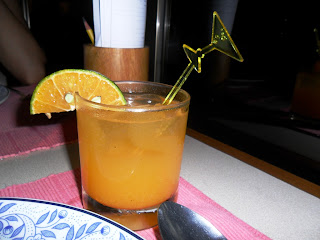 "Don't these things come with a man?," we teased the server who gave us condoms instead of the usual mint candies after we settled the bill.

More memoirs at Ebie and Arlene's Our Weekend Memoirs.

Sunday Stealing: The Majorly Personal Meme, Part The Last
Please scroll up for Our Weekend Memoirs 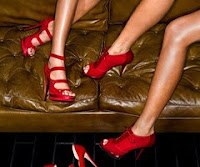 Today we ripped this meme off a blog that is written by a group of high school students. The blog is called Eternal Fireworks. The writers are: Michael, Kynan, Alex, Kenny, Chris, Leo, Shelley, Athy, Bam, Tina, and Bnita. There is no statement as to where it came from. But, it was probably stolen there as well. So, of course, that will be as far as we go. Tracing back our theft's thieves might take some time. It is a long meme and we shall do it in parts. Cheers to all of us thieves!

41. What are your plans for this weekend? Saturday I had dinner with a friend at Cabbages and Condoms, and today I am bracing for machineless marking of university exams

42. Do you think someone might be thinking poorly about you? Why might that be? I don't know and I don't care. My life is good.

42. What features don't you have that you would like on your cell? umm... speech bubble that blinks "to be paroled in a heart beat"

43. How many people can comfortably sleep in your bed? two. three is crowded. I don't have room for a Camilla

44. What are you hoping happens by the end of 2010? another holiday

45. What was the last video you watched on YouTube? abandoned castles

46. Would you ever agree to an open relationship with someone? for now I'd rather case closed.

47. Is there something that you could never give up? whatever's in my velvet-padded bucket

48. Would you, (or did you) prefer a small, intimate wedding reception, or a big-scale, over-the-top reception? The Thai flag was waving at the in-laws' residence during my wedding reception. I didn't know 95% of the guests. So I'll try intimate if I ever attempt the institution again, and I'll have veto power on everything including the groom's color socks

51. What were you doing at 12 am last night? re-reading Breaking Dawn

52. Was this summer a good one? How warm was it where you live? I traipsed 4 major cities in 3 countries this summer; my SPF remained at 20

53. Can a man and woman be friends without having feelings for each other? why are 'feelings' always assumed in a man-woman friendship?

54. Do you think long distance relationships work? If you’ve had one, tell us about it. It depends upon what long-distance entails

55. Do you know why it’s called “Random Boredom“? no time to research; laundry is still piled up

56. Do you think that it’s always the man’s responsibility to initiate sex? no

57. Have you ever made love while you were in the same room with another couple? no

58. Tell us the best thing about your current or most recent S/O. revolutionary zeal for his beliefs

59. Tell us the worst thing about your current or most recent S/O. unmatched pigheadedness

60. Would you write one question in today’s comments so that we could have our followers allow us to steal their questions? We’ll need at least 15. When should you procrastinate - now or later?

Anonymous said…
BWAHAHAHA I love the name of that restaurant and to think you get a condom. ROFLMAO!!! That makes me want to go and be an old maid ROFLMAO!!! Too funny about choosing the grooms socks. When you do your laundry...make sure to include mine. Ya hear. LOL. Have a great Sunday :)
5 September 2010 at 12:30

Swati said…
Enjoyed reading your response to questions :)
Have a great Sunday!

I gotta go wipe off all the o j I spewed out on the keyboard now...the restaurant.

Hazel said…
Anni, I'm still struggling with laundry; can't believe how unmotivated I could be with domestic duties :D but I'll get around to it before midnight.

I am Harriet said…
What a crazy name for a restaurant. Hope the food is good.

Wendy said…
You're a blogger and a reader similar to myself...I saw the Jane Austen quiz and had to rush over, I haven't done it yet. Marianne is one of my fave. characters, wouldn't surprise me I got her too. And I'd love to hear more about your "traipsing" this Summer. Have a good Sunday.
6 September 2010 at 01:53

ruthinian said…
i would surely love to go to that restaurant 3 years ago. too bad i am married now. or is it a good thing? hahaha well i been the screwdriver tastes better there.
6 September 2010 at 06:17

Bud, stupid laundry getting into my meme addiction, rofl!

Ruthi, the restaurant accepts all sorts of civil statuses :D it looks like a nice date restaurant lol!
6 September 2010 at 07:21

Ebie said…
I vote 100% of their after dinner giveaway instead of the usual mint! The name is very inviting and sure would attract lots of customers.

Anonymous said…
Grin. The things you can learn from FFF. I had to reread the sentence to make sure I really read "condom."