"Inside everyone is a frontier waiting to be discovered"


goes the tagline. Dances With Wolves is a 1990 film starring Kevin Costner. I chose it for my entry to this week's TCP theme: western, as it's the first and probably the only one of the genre I have in my collection right now. I haven't toughened up with westerns but I buy and collect one that I like for it's quality and the way it is presented. And maybe I picked right. When I checked out 'Dances' on the Internet Movie Database I found out it won 7 oscars. 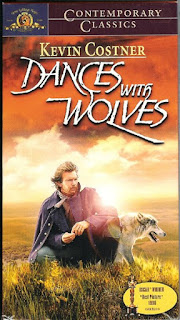 Here's the plot summary with a link of the source, followed by the trailer:

Having been sent to a remote outpost in the wilderness of the Dakota territory during the American Civil War, Lieutenant John Dunbar encounters, and is eventually accepted into, the local Sioux tribe. He is known as "Dances with Wolves" to them and as time passes he becomes enamoured by the beautiful "Stands With a Fist". Not soon after, the frontier becomes the frontier no more, and as the army advances on the plains, John must make a decision that will not only affect him, but also the lives of the natives he now calls his people. ~ Written by Graeme Roy Source
~ Visit Kikamz @ Just About Anything for more westerns ~

kamz said…
didn't get the chance to watch this yet but im sure it's a good movie. good choice for a western movie. speaking of costner, dami nya movies in this genre. there is also wyatt earp where he plays the role of a lawman.

thanks for joining this week hazel. next week, we will post movies about presidents or their first families. till next tcp! hugs and happy tcp!
10 November 2009 at 11:33

Ebie said…
I have seen this movie too pero taas kaayo.

July 15, 2010
I'm riding along Mommy Moments this week; my first post in months. I miss this meme, the kids' photos and the mommy chats. Alrighty here's CJ eyeing the next ride... This was some space capsule if I remembered it right - Everytime I fasten CJ on a helicopter, I daydream of my very first experience with aircrafts. I was his age. A helicopter with a bride on board flew low over our neighborhood dropping us bunches of red bougainvillas. To this day that beautiful spectacle remains alluringly fresh in my mind. For CJ I like to think this ride symbolizes a limitless sky he could soar into. I love the sensation of holding and releasing my breath watching him take off, and hoping he will be just fine. Check out more kids' rides at The Mommy Journey .
19 comments
Read more