This week has been a lot better than last week. One significant thing led to another. I'm happy about and grateful for:

a second chance
It looks like it is and I consider it to be so after a mistake I made on these anti-virus programs wiped out all my pictures. Most of those I label "precious" haven't been sent to email or stored in a flash drive or posted on any social network site. Everything vanished. I tried hard to be cheerful and carried on but the loss was such a nasty cloud over me last week that I grew two canker sores. Then I worked again on restoring them but without expecting anything anymore. Tweaking and hoping I tried these hidden files that warn you not to open them or your other files would be messed up. I had nothing else left to lose anyway so I risked it. Alas! there they were! The saying "you value a thing when you lose it" had never taken a more distinct meaning. It taught me a few lessons as well: always have back-up and don't take things for granted.

a place to stay
I was getting worried that it's already mid-March and we haven't booked a hotel in Hong Kong yet. Finally we have. I acknowledge Chette's searching prowess. The place she found is not just new with a good price value. It's also in the midst of everything we need and want to do.

Alice in Wonderland
It's a beautiful film and I enjoyed watching it.

Shirts and blouses that fit
I just love it when I go shopping in a large mall and I find what I want right on the spot. I get to go home quickly.

Chat about a cat
Meet Kareltje, one of blogosphere's most famous felines. When I headed over virtually to the Netherlands to say hi to Anya (Kareltje's human Mom), CJ was watching video clips on another window. We talked -- 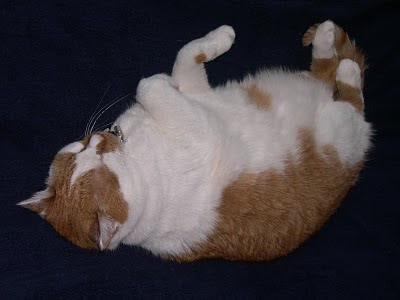 CJ: (digressing from youtube) Mommy, Garfew?
Me: (on an impulse to correct) Garfield, Baby Pooh. But it's Kareltje ... (and wishing to evaluate the correction) ... who's that?
CJ: Orange!
Me: What is Kareltje doing?
CJ: Circle!
Me: How does a cat sound?
CJ: Karew fat!

It's either a situation that heralds the need for audio-visual comprehension overhaul or the influence of these Baby Einsten Art DVDs or something I have no idea about. So much for a master's in Communication. 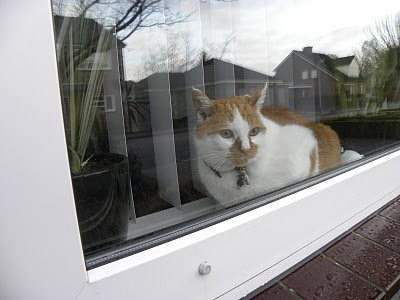 Thank you, Anya for letting me use Kareltje's photos.
Share what you love about your week with Susanne at Living to Tell the Story.

There's Vivian, there's Daisy, George, Heartwell, Norman, and I'll try to remember the rest later. This was taken on a Friday afternoon after beautifying our class garden; most probably why we were not wearing our uniform. That's our homeroom adviser, Mr. Israel Tigley, grinning in the middle front row :-) Most of these classmates are on Facebook. Some of them may recognize themselves after the tags. (Guess the pic will enlarge when clicked on) 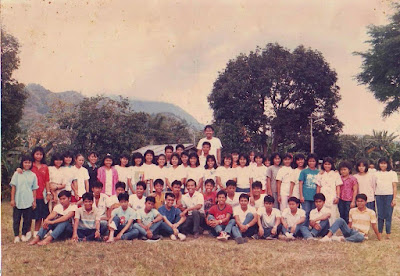 Share your old photos with Alicia at More Than Words.

Anonymous said…
What a cool picture. Very nice :) I like the cat conversation too good :). Lucky you found your pictures. Ooo Disneyland next month? Best get on that. LOL. Great week. Oh and green beer tasted like beer with green food coloring. LOL. Go figure LOL
19 March 2010 at 11:41

Anya said…
LOL
one of blogosphere's most famous felines hahahaha......

He is sitting next to me
(with a catsnack hahahahaha....
he eats it always when I drink coffee oooppssss... DIET :(
Thanks for all Hazel
Lovely post today !!!!

Carrie said…
Oh yay! I'm glad you found a hotel, and recovered your pictures, and got to see Alice in Wonderland! We want to see it. Hopefully we can soon.

Anonymous said…
I am so glad you found your photos!! That reminds me I need to back mine up -- it has been a while since I did.

Fun conversation about the cat!

TXDidi said…
Oh, I feel your pain about the lost photos. I lost all of my digitally stored photos last year when my external hard drive crashed. Luckily I had already scrapbooked most of those pictures but no longer have digital copies. Now I double-backup everything.
20 March 2010 at 02:20

Susanne said…
My heart just dropped for you reading #1. I am soooo glad that you found them and had courage to open those Do Not Open files.

Personalized Sketches and Sentiments said…
Hope you have lots and lots of fun in Hong Kong! Great photo flashback too! I immediately spotted your advisor's smile as soon as I looked at your photo. Looks like you had lots of fun that day :o)

Laura@OutnumberedMom said…
What a great second chance with those pictures...and a cute cat!

Glad this week was better for you than last.

ellen b. said…
Sorry Hazel...wordpress was sending all your comments to spam. I retrieved one. Every so often I have to remember to check my spam folder to see if any genuine comments are there...
20 March 2010 at 10:30

Robin said…
I'm so glad you got your photos back. I have a friend who says, "It's not a matter of "if" your hard drive is going to crash, it's a a matter of "when" it's going to happen... make sure you back up". It's a great reminder.

Have a great weekend.

Lisa notes... said…
Oh, I am SO glad to hear you got your pictures back! I would have been very disturbed about that, too. It pained me to even read about it. Enjoy your weekend!
21 March 2010 at 07:27