Quick Facts:
Ayutthya was founded in 1350 and is Thailand's second ancient capital (after Sukhothai);
It was named after Ayodhya, a city in India, the birthplace of Rama
It was once a sprawling metropolis and a famous hub of international trade
It was destroyed by the Burmese army in the 18th century
It is now recognized as a UNESCO World Heritage Site 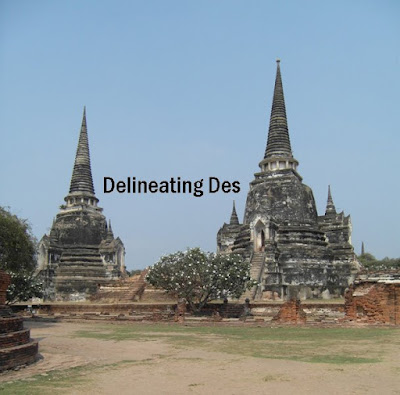 Look at these chedis. I can't figure out exactly if the base of each pinnacle is either a square or a bell. I stood far away waiting for other tourists to clear the view when I took this shot. If it's a bell-shape then it's of Ceylonese influence. If it's a square, it's disctinctly Thai style. I would say the base on the right looks like a bell, but the left one is what I'm not sure of. How does it look to you? 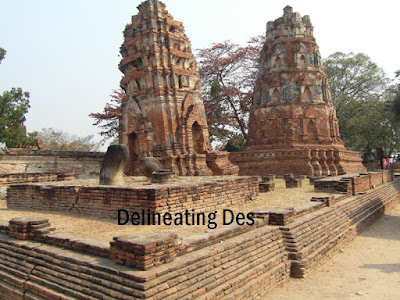 Prang are huge and high reliquary towers dotting the city. These are the tiny versions. The corn cob-shaped and rounder stupa shows Cambodian influence. This time I drew nearer as I suspect my SPF 50 was wearing thin and luckily more shade was available up close. According to our tour guide considerable destruction was done by people who believe there are treasures of gold left among the remains. I did see deliberate cracks and even fresh holes. 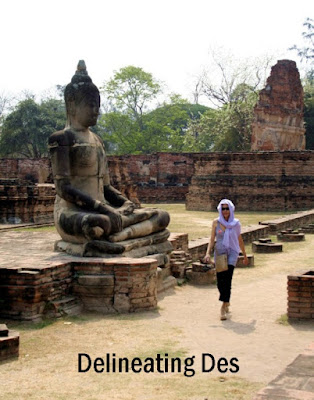 My first visit was in 2000. I accompanied the then husband on a work-related trip. He was among the executives present during an acceptance ceremony for a building their company donated to a school in the area. We had police escort; it was strictly business and sightseeing was very limited. In other words it was NO FUN. I swore I would go back. So I did nine years later.
Charm and spirit emanating everywhere! This must be a glimpse into the sensation historians feel. (I should have majored in History, duh!) The scarf serves double purpose - protection from the sun and a covering for my bare shoulders. Pagodas are sacred to the Thais and it's rude to walk around them in scanty clothing. My head is a bit bowed, a treading respect for hallowed ground.

♥♥ Willa ♥♥ said…
ang ganda talaga ng Thailand, so many historicla places to visit. Hopefully I can do it soon!
happy sunday!
My Weekend Snapshot
15 June 2009 at 01:47

Ebie said…
Hazel, that is a striking pose! I have always loved Thailand's architecture and old ruins. It has a lot of history.
BTW: I cannot get an answer of the coins on the stone at Manzanar. Sorry. Have a nice week!
15 June 2009 at 06:39

Aimee said…
Wow, great post! I love visiting historical sites. Thanks for sharing quick facts about the place.
15 June 2009 at 06:51

I love historical/architectural sites. Soon, I'd probably post my own photos hehe

Carver said…
This was a fascinating post and great shots. Thanks so much for your thoughtful comment on mine.
15 June 2009 at 07:48

Marites said…
I really like this place when we get there..beautiful and historical, well-preserved too.

The Explorer said…
Thanks for the tour, I really appreciate it.

Chris said…
i have an award for you http://www.mommyjourney.com/2009/06/old-and-new-treasures.html

Kero said…
Thailand really is an exotic place. I'd really love a holiday here, Hazel. Thank you so much for the visit and till next weekend!
15 June 2009 at 16:46