~ brought to you by Alicia of More Than Words ~

The month of August has been filled with birthday celebrations of friends and family (read: mine and my canine). As I've already blabbed about people's birthdays, I thought this FPF post would be about Mozart. He's my toy poodle who turned 7 on August 2nd. I had him two years before my biological son arrived. This was taken on his first birthday in 2003, using my ancient Kodak camera. Like they say first baby, first birthday: big deal :D. So Mommy threw this cuddly guy a little party.

~ waiting for his guests ~ 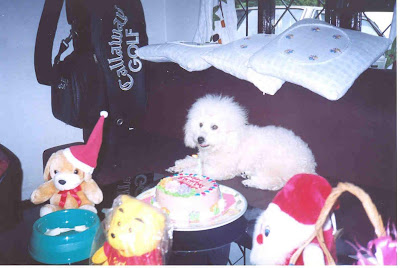 Actually there were only two invited guests. One didn't make it to the fun because she overslept. Her name is Dawn, the youngest 'child' of our next door neighbor, a local film actress. Dawn's mom handed a gift. Over the fence.

~ and this is Salapao, the other neighbor's 'baby' and Mozart's partner in ruining my alugbati patch every single week ~ 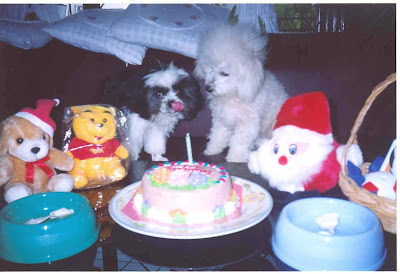 They snobbed the cake, but had fun with their milk and other treats. Then they tossed their toys to and fro, jumped up and down, kicked my poor magazines here and there. The result was total chaos. I took it as their way of saying, "We love you, Mom. Thanks for the party." Well, what did I expect? These two are naughty and equally spoiled rotten.

LivingforGod said…
This is so cute and funny. I like the guest in plastic wrap, too :). Happy Birthday, Mozart!

Thanks for your lovely comment on my blog! Have a wonderful weekend!
5 September 2009 at 00:40

More Than Words said…
Oh, that is toooooooooooooo funny and tooooo cute!! I would totally do that with our puppy!!!!!! I never thought I'd ever say that!!
5 September 2009 at 01:12

PropellerHeadMom said…
I have never seen a doggy birthday party! Those pictures are so adorable!
5 September 2009 at 07:43