It's random playing time here, picture-wise. It took me a bit longer to put together an entry for this week's theme. Most photos in Cj's albums are of him playing. "Damn indecision," to quote MJ from his 'She's out of my life,' (haven't gotten over him yet, btw) on choosing snaps to show off today. Cj plays in the water, on solid ground, and through the... ok, not another song, lol. He just plays virtually non-stop; I fuss about it sometimes. His Dad says, "Her Royal Highness, the Princess Mother encourages all children in the Kingdom to play, play, play while they are young. When they grow up, it will be work, work, work."
Over at his Dad's place, which I call the Toy Jungle, toys are knee-high on the floor. I occasionally tread things I can't even identify, and I'm there only ten minutes max once a week. Sometimes I sit on a bench outside the gate and watch Cj play with the village kids. But once he threw his ball too hard, it bounced too high and landed atop a neighbor's bungalow with a loud thud. I thought the roof had split open. Game over was Mommy's prompt announcement. Today, I make it simple - three snaps from the first album I happened to click while preparing this post.
Favorite spot to play in and mess up - yaya's room 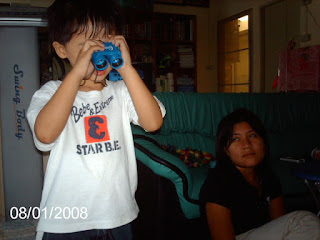 With his water gun during Songkran nite, or Thai New Year: 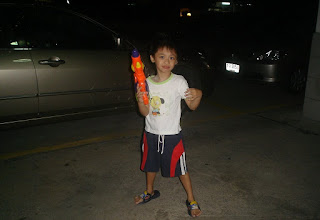 While waiting for our lunch at S & P, he improvised the spoon into a drum stick and experimented with sounds on the table. Getting embarrassed, I asked him to lower the volume of his 'wonderful' composition, before other patrons started noticing. Luckily he obeyed:

Head over to The Mommy Journey to see more kids at play.

Beth said…
I love to see kids play with makeshift toys! The spoon being a drumstick is one classic example.
His Royal Highness is right. The Royal Prince should play all he wants for when he's all grown up, work work work naman! :)
17 July 2009 at 10:33

Meikah said…
I am happy to know if my kids love playing at their nannies's room. That means they are comfortable with them, and that they are really in good terms. :)
17 July 2009 at 13:41

SASSY MOM said…
I agree...let them enjoy their play time now because when they grow up it will be serious work. Happy weekend!
17 July 2009 at 14:18

Tetcha said…
You really had to narrow down your choices to a few pictures to share for this week's theme. I bet a lot of your kids' photos are playtime moments. Thanks for sharing these cool pics!
17 July 2009 at 14:56

Thanks for dropping by :)

Care for an xchnge link?

Our Adventures Together/
Her and History
Tasty Exploration
18 July 2009 at 00:08

admin said…
i also agree with his dad let them play and be carefree while they are young... they really love playing with just about anything...
mommyrache
18 July 2009 at 17:42