Iris and A Beautiful Mind

Today is my first time to play a movie meme. I want to thank Tuesday Couch Potato host Kikamz of Just About Anything for the invite. My lifestyle doesn't allow me to be a couch potato, although sometimes I wish I could be. When I decide to watch a particular movie, I make sure I learn something from it and don't waste my time and money. Movies of value and significance go right to my DVD collection. The theme for this week is husband and wife.

You will notice that my choices are closely associated with my field - Education. Both depict lives of intellectuals in their 'natural habitat' - topnotch institutions of learning. As much as I admit I am working towards my goal of leaving the profession, my respect for the industry remains and I will always be awestruck by legendary brains. They are my inspiration and motivation to give an entire term my best shot as a university lecturer starting next month.
Did I just lose the husband and wife theme? (lol) Alright, the movies:

A BEAUTIFUL MIND
John Nash (the husband, played by Russell Crowe) develops "paranoid schizophrenia and endures delusional episodes while painfully watching the loss and burden his condition brings on his wife and friends." Most likely nobody wants to envision being married to and living with someone who on the outside looks crazy at best. This movie portrays husband and wife sticking together through it all. I do love the tagline: The only thing greater than the power of the mind is the courage of the heart. 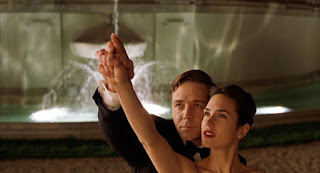 Photo Source here.
and
IRIS
The wife (played by Dame Judi Dench) deteriorates from Alzheimer's disease. The husband (played by Jim Broadbent who is Professor Slughorn in Harry Potter 6) struggles to become her caretaker. It's the very familiar for-better-or-for-worse scenario.

Photo Source here.
I tried the trailers but it slowed down everything, so I provided a link on each movie title in case you fancy a re-watch or a review of credits.
Kikamz hosts Tuesday Couch Potato. Head over to her site to play along.

kamz said…
Hubby and I love watching A Beautiful Mind too mommy des. And aside from Lorenzo's Oil, this was my other choice for this week's post. buti i decided on the latter! LOL! And the tag line The only thing greater than the power of the mind is the courage of the heart is indeed TRUE! love truly conquers all!

as for iris, i haven't watched it yet. so to my to-watch list they'll go!

thanks for joining this week! hope you enjoyed it. kitakits ulit next week? hugs! by the way, i already added you to the McLinky.
18 August 2009 at 12:31

niko said…
i think i have to rent a copy of this two movies.. they sound great! hmmmmm. i have lots in my list already weeeee ;)

my entry is up at

Hazel said…
Hi Kikamz, thank you for adding my link. i did try to sneak in during breaks at work but our connection doesn't seem to allow such net activity

pehpot said…
never seen any of those.. hihi.. waah I can't join this meme, I am not a couch potato kase, I don't watch movies that much, may inip factor lage ako..

it's been a while since my last visit.. I was really busy the past few days, nursing a husband, reviewing the kids.. etc.. It's a breather to read another witty article from you :)

and if you still have time (or if you can sneak in the office) please join my PHOTO CONTEST It will be fun!

genejosh said…
I saw beautiful mind and it's interesting but I haven't yet seen IRIS...