View more FFF participants at Living to Tell the Story

My week went really fast. It's probably because of the nature of things happening.

1. Unexpected break. A quick storm on Wednesday cut off the power for an hour. Everything at work was paralyzed. The academic dean had to cancel classes in the afternoon. Students cheered. But they didn't know the biggest cheer rose out from the faculty offices :-)

2. Discoveries thru a bus window. I made use of the unexpected break by taking a bus ride to the heart of Bangkok. I haven't observed things along Sukhumvit road for a few years. There's a garden and an Arts and Culture Center to visit for free.

3. MP3. When work is not that serious, one of my best friends in the office is a pair of music-filled earphones. Sometimes playing songs, especially when they're your choice, makes work so much smoother and sets the mood well throughout the day. 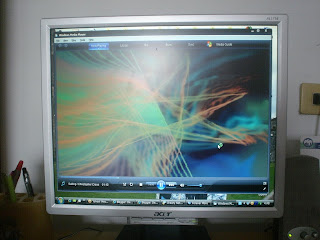 4. Going solo to the movies. I actually rewatched Harry Potter last Sunday. This time I was alone, not babysitting a hyperactive 5-year old. It was relaxing. 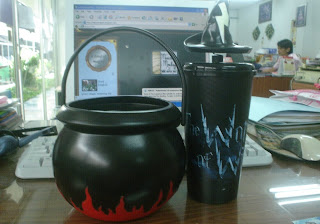 And I got myself some highlight:

5. A deal. I mentioned somewhere among previous posts that I was making a decision to accept a university instructorship or not. I decided not to. It was a NO even after the vice president asked me to drop by his office. He fired off negotiating tactics as soon as I sat down and through it an idea suddenly sprung -

I responded, "Ok, I will take up the post if you write the British Embassy..."

He seemed stumped and it was my turn to negotiate.

"What are you doing in England this time?" he demanded.

I flashed him a (sort of wicked) smile, "no money involved... write the embassy, Boss and you got yourself a new instructor."

He didn't ask what did I want him to write about. Without much ado he said, "alright, I will."

annies home said…
some of the greatest travel sights I have seen have been through the bus window
7 August 2009 at 20:04

ellen b said…
Way to go with your negotiations!! I'm glad you got away for a enjoyable time seeing the newest "Harry" movie. I haven't been able to see it yet but will soon. Glad you got a break from work!
7 August 2009 at 21:02

Susanne said…
I have never been to a movie at the theatre by myself but now that you mention it, it seems like a really nice escape. I might have to give it a try.

I like taking the bus once in awhile, just to be able to look out the windows and really see the scenery. When I'm driving I'm so focused on driving and the traffic that a lot of lovely stuff whizzes right by me.
7 August 2009 at 21:43

nikkipolani said…
I agree about the help an MP3 player can be when work doesn't require concentration. And congrats on your deal with the VP :-)
7 August 2009 at 22:09

Lisa notes... said…
Unexpected breaks ARE nice. And I LOVE my MP3 player--it's "my friend" in the middle of the night when I can't sleep and don't want to read. I listen to podcasts and sermons and books on tape, etc.

Brenda said…
Its true that music often makes work go faster. Its almost like we don't realize how much we accomplish while we listen to music. Sounds like a good week.
7 August 2009 at 23:07

Willow said…
Great Fave Five! I agree that bus riding opens up a whole new level of society and the city to you.
So you really didn't want the lecturing position, huh? :)
7 August 2009 at 23:59

Carleen said…
Good for you and your negotiating talents. I'd be so enthralled with the idea of teaching in the UK that any hope of negotiating anything would immediately be lost as soon as I heard the location, LOL. :)
8 August 2009 at 00:26

mom2triplets04 said…
When I had no kids it was great going to the movies alone. One day I will do that again when the kids are older. Great week
8 August 2009 at 00:39

Anonymous said…
I loved your negotiating tactics. Excellent. Excellent FFF have a good one :) Aloha
8 August 2009 at 04:35

Jientje said…
There is nothing like an unexpected break from work, or good music while you work. I enjoy taking the bus too. It takes me to Antwerp much faster than I could get there by car, and you get to see a lot more! Have a great week!
8 August 2009 at 14:56