Capital Company and a Copycat

~ brought to you by Susanne ~
The highlights of my week centered around my birthday, which was the last in a series of birthday celebrations for August; my poodle's birthday excluded. The new month should come in less eventful if we can help it. But as usual, and thanks to Providence, a party or two continues. Meanwhile my faves for this week are --

1. Absentee voter registration. In two years and a decade of living overseas, I have never done anything like absentee voting. In fact I never got any chance to vote at all. There's a presidential election at home in 2010 and I decided it's about time I made my choice official no matter how dim things seem to be both politically and economically.

2. A good laugh and a friendly vice consul. At the Philippine embassy for my registration there was a little glitch. While waiting for the computer to get back to ready mode for processing e-signatures, a friend took me riding down memory lane, "Didn't that guy carry you at some point when you descended Mt. Kitanglad?

Wow! it would have been fun if it happened but all I could remember was while we did hike together nothing romantic ever came up. Still I was thrilled to be reminded of those happy college days. We laughed. I giggled and then laughed at myself for giggling. After the glitch was sorted, the vice consul made some friendly chat over a final look at my documents.

3. Capital company. I needed to see a doctor to justify a day off work. But with the notorious Bangkok traffic it was too much of a hassle really. As other options were considered, a realization suddenly hit. It's not like taking advantage. But sometimes coincidence just makes circumstances convenient. It isn't anyone's fault if you are treated to your birthday dinner by a friend who also happens to be a licensed medical doctor, is it? Later in a YM chat with another friend I told her about the dinner. She said she missed fine dining. It made me treasure what I sometimes take for granted. Not the friendship, but fine dining.

4. Arts and Culture Centre. It's been a plan that celebrations for my birthday would include a few hours of admiring art objects. I'm happy the plan materialized. More importantly my five-year old was with me to begin learning how to appreciate art and culture. We had loads of fun. 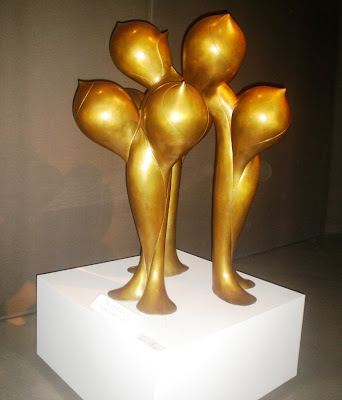 5. A copycat. We proceeded to Siam Paragon for snacks that we didn't have for awhile - fish (Atlantic cod) and chips. Then we met up with friends for ice cream. Cj did what I normally do to him when eating out to avoid messy fingers and shirt. This was not the usual divinely yummy and pricey ice cream, but the moment was priceless. 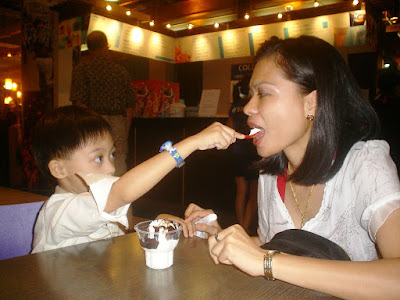 Have a great weekend, everyone!

Anonymous said…
What a great FFF. and the last photo is awesome. You sure can't beat having dinner with a doc. I so hope you vote :). Have a great Friday
4 September 2009 at 11:37

Kari said…
Happy Belated Birthday.
Great Five for the week and picture is cute.
4 September 2009 at 22:22

Anonymous said…
Well, it's clear you've had a terrific birghday! And that photo with the ice cream.... gourmet not required! I liked your #2 moment -- sometimes these little things bring a lot of joy.
4 September 2009 at 23:24

ellen b. said…
Happy Belated birthday. I'm an absentee voter too. Have a wonderful weekend. Love the ice cream shot...
4 September 2009 at 23:50

Jerralea said…
I'm glad you had a wonderful birthday week! Sounds like you were able to enjoy several favorites.

Brenda said…
How handy to have a friend that is a doctor to help you out in those moments. I am familiar with Bangkok traffic and I can imagine what a hassle that would have been for you!

Susanne said…
A priceless moment indeed. That picture is so sweet. Happy Birthday to you. It looks and sounds like you had a wonderful week!
5 September 2009 at 08:59

Melli said…
Good for you getting registered to vote! You should voice your opinion - even if you are not there!

It looks like you and your little one had a great time that day!

Willow said…
Happy Birthday Hazel! I think the best fave was the ice cream shared with your son! I love that photo-
5 September 2009 at 09:02

Hi Anya, I like to think the ice cream was yummier than usual because of the little guy :-)

Hi Lisa, is surely is

Hi nikki, indeed they do

Hi ellen, it does make things easy, doesn't it?

Hi Jerralea, I don't know; my favorite part there is getting a civil duty thing done

Hi Susanne, I did

Hi Willow, you're right. i think the same way about the 5th fave