Can you believe this???

Wait... I'm counting us.... wah! Eight fully-clothed grinning teenagers! All we needed were robes and a minister and we're ready for rebaptism. First glance at this photo after 19 years and I thought there were only 3 of us wearing size L shirts. We seem to have multiplied over the years. This is the same summer in 1990 I reminisced about in a previous FPF post with that Eric. Oh that's him alright; the guy holding the little girl, and that's me with my left hand on his shoulder, not knowing whether I should stay for the photo op or run back to the cottage.

Now what were we laughing about? ... recall ... recall ... ok, my guess is our bathing suits. Like most of them, I didn't plan to get wet. But a few bored companions had this goal of having everyone in the water before sunset. Early on I told them I was staying put looking as gravely as I could and hoping they'd spare me. But they were planning an ambush and carried it out by pouring a glass of coke on my head while I was chatting with Michael (the bf, not on pic). A couple of boys then dragged me to the beach. Well, as they say, if you can't beat them, join them. This is how we ended up frolicking. 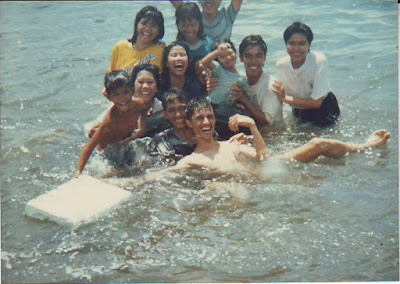 The girl in yellow is now a church pastor's wife and lives in Kuala Lumpur, or was that Singapore... I can't remember. But I have a vague memory of friends talking about that young boy on the left holding a slab of styrofoam. They said he later swallowed his tonsils. The latest update I heard about the little girl is she's attending nursing school. That's a smooth, shiny inflated wheel in our midst, a common sight on Philippine beaches. Oh, that guy in front, the only appropriately dressed beach party-goer, dated my cousin in college. They're now neighbors with each of their spouses and children in California.

~ FPF is brought to you by Alicia of More Than Words ~

Anonymous said…
Thanks for sharing. What a great flashback. Cole head. ROFLMAO
25 September 2009 at 11:32

Anonymous said…
Thanks for sharing. What a great flashback. Cole head. ROFLMAO
25 September 2009 at 11:33

More Than Words said…
It looks like everyone is having so much fun! Oh my gosh..that little boy swallowed his tonsils?? Really???

What a great picture.

I think I told you my son was in Bangkok, but he just left for Turkey.

He is teaching English there.

He loved your country!

The imPerfect Housewife said…
Priceless - that picture makes me happy just looking at it! Everyone looks so happy and like you're having good "clean" fun!! ☺
25 September 2009 at 22:17

Beth said…
I sometimes forget the stories behind the emotions depicted in the pictures! Galing mo, naaalala mo pa!
25 September 2009 at 22:21