Hired to teach. Programmed to kill.
That film tagline is a world away from the principles of teaching for education professionals. I don't think there's even any need for followers of the Teachers' Code of Ethics to be horrified. The second statement is what it is - a science fantasy. But for those who have had a frontline taste of what it's like among the worst scenarios of discipline issues, what if... what if robots were employed to educate gangsters, drug addicts, and other kinds of violent imbeciles?

Fortunately the only two instances where I had to deal with anything that resembles what I just enumerated were when a budding, uncircumcised ruler-of-the-world wannabe showed me his knife to impress; and just last week a belligerent kid in his late teens attempted to barge into my class. Thanks to the internet the emergency numbers of the cops are just a click away; or thanks to the padlocked fiberglass door. In more extreme cases I just might need a stiletto-wearing android to eliminate undesirables

"The time is the future and youth gang violence is so high that the areas around some schools have become "free fire zones," into which not even the police will venture. When Miles Langford (Malcolm McDowell), the principal of Kennedy High School, decides to take his school back from the gangs, robotics specialist Dr. Robert Forrest (Stacy Keach) provides "tactical education units." These human-like androids have been programmed to teach and are supplied with weapons to discipline problems. These kids will get a lesson... in staying alive." (Wikipedia synopsis ) 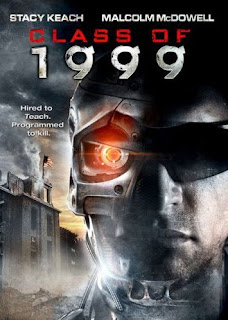 Courtesy of dreadcentral
EDUCATION AT ITS FINEST!
Hey, I was just bored (lol).
~ More at Just About Anything ~

Anonymous said…
Great post. I'd want one of those. Keep the pumps handy my friend. I think you would be an awesome android err human with them. :)
22 September 2009 at 09:15

Mys said…
This inspired a play we showed our school. I remember this movie. My classmates were crazy about it and could relate to it because we were full of mischief.
22 September 2009 at 09:32

anti-wrinkle injection therapy said…
Wow, Its very nice video clip. Thanks for sharing it. I enjoy this post very much.
22 September 2009 at 11:35

Hazel said…
Thom, sometimes I wish I were an android :-)

Mys, handling mischief among pinoy teenagers is as easy as eating peanuts. the little elves who imagined breaking the rules was popular ha! even when i was a teeenager myself never for once was I impressed with the locos and locas who were looking for self-esteem booster as if their parents had money to bail them out.

sweet_shelo said…
nice video clip sis.. I should watch this..

kamz said…
this one, i haven't seen yet. i better check this out. sounds nice!

so you had your share of student violence too, eh? although the instances are far too different from the scenario you described from the movie, still you have to take care. you never can tell.

thanks for joining this week mommy hazel! hope to see you next week for a movie fit for the entire family. hugs!
24 September 2009 at 13:01