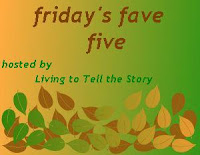 Count your blessings proves one great advice for me. It goes effective even before I could even begin to count seriously. My faves this week are about being thankful for:

1. Sammie who lent me her Loy Krathong photos to feature on my That's My World post. It's not just her generous sharing; it's also about a festival that occupies a charmed spot in my heart. 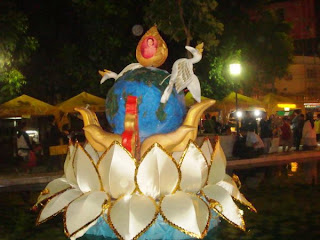 2. A change in routine breakfast. Coffee, among the usual others, is what I've been gulping down for several months now, and I'm getting worried over addiction. It's not right when you have other addictions already. So I cut back and turned to milk, muesli, veggie salad, the healthier lot.

3. Speedy miracle. The co-worker who figured in a car crash after her father's funeral is back. She still looks a bit scary. I could hardly believe that only two weeks ago she's strapped in ICU. But now she's inching her way back to functional mode. That means no more double loads for the rest of us. Her crutches remind me never to ever doze on the steering wheel like I did years ago - almost drove off an overpass on Kingkeaw road. My angel must have poked me to the 24-inch railing which kept the car hood from dangling.

4. Being late to the cinema. For the first time in my life I was late to an entertainment. Now why am I thankful for missing the first 45 minutes of New Moon ...? I declare it a nice break on my record of usually being late to church and almost never coming late to anything else. It's got to have given me the-other-way-around look at things. Next time I enter a house of worship I'll be on time.

5. A bit of shopping. It's the reason why I was late to the cinema. I'm thankful it isn't bad; rather a reward for following a self-imposed rule: shop only if you are disciplined enough to stick to the budget.

~ See more faves at Susanne's Living to Tell the Story ~

Barbara H. said…
So good that your coworker is doing so much better!

Lisa notes... said…
Changes in routines can be good. I need a change in my breakfast routine but can't think of a better alternative yet to my biscuits and syrup.
Glad your co-worker has recovered so quickly! Have a great weekend!
27 November 2009 at 23:46

Anonymous said…
Ah ha...so it was shopping that made you late. But at least you admitted it. LOL. You know I'm never late for anything either. I'm sure if I thought about it long enough I could remember one or two things I was late for but there wouldn't be very many. I don't do fashionably late well at all. Have you ever thought about switching to tea? I use to drink coffee and then just quit. Too much trouble. :) So I drink water now in the morning. :) But as I say you might try tea. Great news about your co-worker. I'm so glad you got the Loy Krathong photos. It's just wonderful. Have a great Friday and weekend ahead :)
28 November 2009 at 02:18

nikkipolani said…
It's terrific that you can get off coffee without any side-effects. Good for you! #3 and #4 are good reminders aren't they? And congrats on #5. It's a discipline well worth keeping.
28 November 2009 at 03:25

Brenda said…
How nice that your coworker is back to work, what a scary thing that happened to her.

Willow said…
I'm glad your co worker is better. It's a good reminder for all of us to be careful driving.

I'm a big coffee drinker! I know I need to drink more water so I'm trying to keep myself to a water schedule. I'm not much for being on time to everything, but I keep trying...

RA said…
What a lovely photo to share! This was very kind of your friend. I'm glad to read about your co-worker. Wishing her a speedy recovery. Have a wonderful weekend :)
28 November 2009 at 21:51

Susanne said…
Wow, your accident story is really something else. That would have so scary to find yourself in that situation. Thank God you were okay and so glad your coworker is also on the road to recovery from her accident.

I know what you mean about the coffee addiction. I've worked my way down to just having coffee in the morning. No more afternoon or evening caffiene for me. Now I'm trying to work that morning coffee down to a maximum of two cups.
28 November 2009 at 23:18

Anonymous said…
i need to do my shopping..

i have been absolutely lazy about it..