This is a (sort of) continuation to last week's TMWT post. Photos in that post were taken in the morning of the tour. Today's photos were taken in the afternoon of the same tour. We spent about an hour on this part of the railway to look at a few things and let our imagination travel back in time. Here's a Wiki overview of the Death Railway:

"The Burma Railway, also known as the Death Railway, the Thailand-Burma Railway and similar names, is a 415 km (258 mile) railway between Bangkok, Thailand and Rangoon, Burma (now Myanmar), built by the Empire of Japan during World War II, to support its forces in the Burma campaign.

At this station we waited for the train which would take us towards the center of Kanchanaburi: 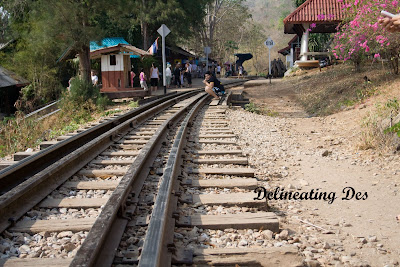 While waiting I went exploring relics near the track: 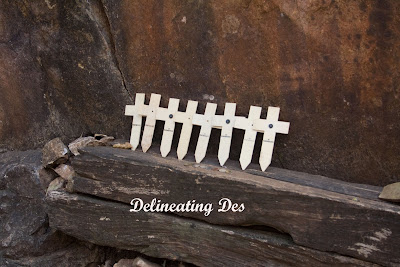 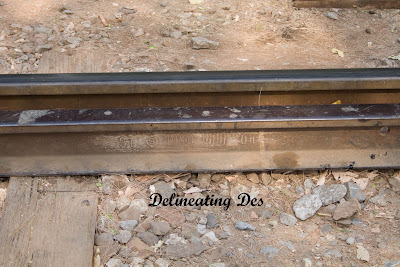 Something to ponder on: 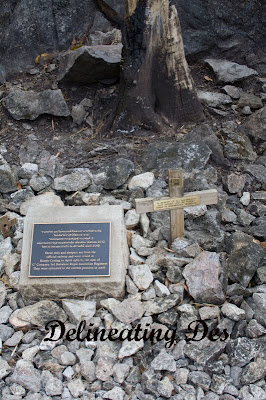 The promised train finally came a-chugging. It's old, simple, and without AC but tourists were understandably excited to be on board as it snaked on a cliff above the River Kwai: 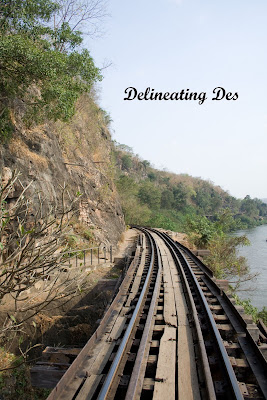 This is the view from the train window. Those are floating guest houses and a restaurant below. During an earlier trip I went rafting with other tourists in the Kwai. On our way back we abandoned the raft and swam with life jackets. Two men pulled my mere 38-kilo frame out of the strong current. At night revellers danced to live music on that white open-air structure. Buffet was tasty and non-stop: 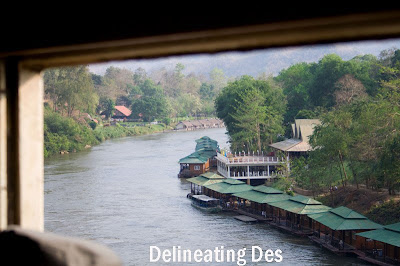 The sucker for sentimental thoughts in me couldn't help staring at this railway thinking of the people who built it and the terrible working condition they were subjected to. War history gives me gooseflesh.

JonaBQ said…
i haven't been on a train for years now. it's a refreshing view.

Unknown said…
Gosh I finally get to see this rail way. So much have been said about it, and so many dies constructing it. And so many foreigners landed and have family in Thailand. Wa deekrup. Kun join My World tee nuan ? pardon me for my poor pa sa Thai. haha..
14 July 2009 at 17:13

SandyCarlson said…
Riding that train line must be a sobering experience. Thanks for sharing these views.
14 July 2009 at 18:42

Rajesh said…
Very interesting history. Loved the way you have captured all the minute details.
14 July 2009 at 22:48

Ebie said…
I've read the first part, now this part. That looks like a scary train ride. The tracks look a bit old and one side is too close to the edge of the river. The photography and the commentaries are wonderful. Good preservation of historical facts. Wonderful post Hazel, I enjoyed it.
15 July 2009 at 03:38

Unknown said…
I think that the railroad stands as a memorial to all those that worked and died buiding it...

There were also NZ POW's used in the construction. A friend's dad died there and a relative of mine was one of the POW's who survived.

He told horrifying stories of what they endured...

Louise said…
Very interesting post with wonderful photos to accompany it. I really love the last photo.
15 July 2009 at 03:46

Indrani said…
Very informative and supported well with lovely shots too.
15 July 2009 at 14:42

I tried thi before but forgot to post it.. pero what do yuo think? ikaw na ikaw ba yan?

I am so flattered by the comment you left on my blog :) at hindi ako papayag na ganun ganun lang un haha..
I will make one for you too.. and I usually post it on Friday para sabay sa Mommy Moments, dun kase usually mataas traffic ko, so I want it na pag may ni review ako magandang exposure ung binibigay ko sa kanila hehe

allhorsestuff said…
Hullo Again!
Those are fantastic pictures and history of the railway! I too get goose flesh thinking of the working conditions and who did the labor at that time in history...

Thanks for the sweet comment on my blog and YES..I braided Cazi's Mustang mane that day..she had never done that, and wanted to see it.
We ride again today later...am going to braid it differently..it's HOT here ion Oregon right now and it will be cooler for him!
Kacy w/ Wa mare~
18 July 2009 at 18:58

Janie said…
The history of that railway's construction is a terrible thing, but the train ride of today provides beautiful view of the river.
20 July 2009 at 06:12