Three cars and a boy

Siam Paragon was very crowded last weekend. I took my son to this mall for a Harry Potter 6 date. Up and up we went, using the elevators. Then we stopped. It was where a former student had her picture taken. I recognize the background. The car gallery. Or should I say the gallery where the fast and flashy wheels sit on display until some multi-millionaire decides to have them. My globe-trotting former student fancied a meeting somewhere there with me. A quick one. Nothing serious. She was in Bangkok for a couple of days, en route to wherever in the world her job was taking her. And I was en route to a job that has been gluing me to the same metropolis for two years and a decade.

Out of the blue Cj thought that despite being usually shy around the camera, it wouldn't be so bad to clown a bit in front of gorgeous machinery. Y chromosomes or the spaciousness of the spot for mimicking movie character actions, documented; or it could be what I didn't speculate at all. He goofed. The camera clicked. And there went a weekend among cars, popcorn and Imax.
Porsche smile 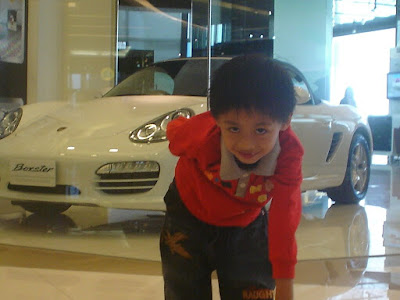 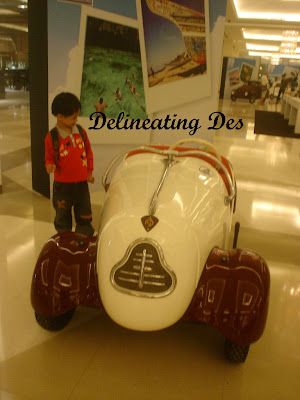 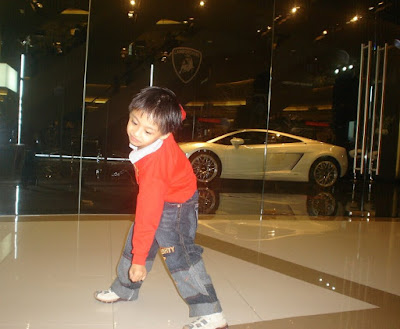 More at Our Weekend Memoirs

Ebie said…
I think Cj is dancing the "walk". he is so cute and funny! Popcorn and pop, that completes the movie date. Enjoy your weekend and thanks for joining us.
26 July 2009 at 09:44

Inday said…
It's really cute to document our children's activities and antics. Nothing is impossible now with the aid of new modern tech straight to the computing world called blog and memes. Thanks for the visit. I shall be following your blog. :)
26 July 2009 at 17:56

Shey said…
What a fun day with your anak! He looks like he enjoyed posing for you too. Great pics! :)

maiylah said…
cute and funny! those are amazing bits of machinery! :)