Cross-cultural misunderstandings are rife among gestures of beckonings and farewells in different parts of our planet. For example, the American gesture for "come here" could mean "good-bye" to Italians. Axtell (1998) observes, "the way people beckon one another around the world can be almost as diverse as the way we greet and bid farewell to one another." Today we look into popular hand gestures to signal farewells and to beckon. 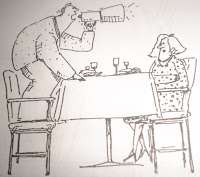 1. In the United States, common gesture for getting someone's attention, as when calling a waiter is to raise a hand about head high with the index finger raised (exactly the girl's hand gesture on Samulli's header)

2. Italians and Greeks will often wave goodbye with the arm extended, palm up, curling all the fingers back and forth toward themselves. 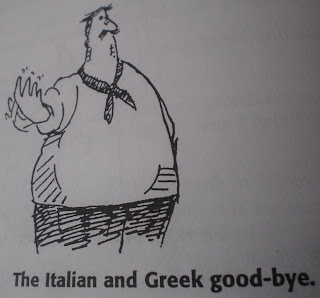 3. The same hand gesture means "come here" in America. But in countries as widespread as the former Yugoslavia and Malaysia, the gesture is used only for calling animals. Therefore, using it to call a human would be terribly impolite.
4. In Indonesia and Australia, is it also used for beckoning "ladies of the night."
5. In France, the preferred way to call a waiter to your table is simply to catch his eye and then perhaps nod the head backward quickly.

6. In Colombia, one way to get a waiter's attention is to clap the hands lightly.
7. In China, to beckon a waiter to refill your tea, simply turn your empty cup upside down in its saucer. If the teapot is empty, turn its lid upside down.

8. In Spain, Mexico, Haiti, when calling a waiter, restaurant patrons can be heard issuing a noise with the lips, something like "hssst," or "psssssst."
9. In fine restaurants in Brazil "you don't ever gesture or signal to get a waiter's attention - you should never have to-the waiter should hover so closely near your side that all you have to do is raise your head upward and whisper your wishes."

10. Throughout much of Europe and in many Latin American countries the preferred gesture for signaling "come over here" is to extend the arm, hand out, palm down, and then make a scratching motion with the fingers (Figure 2.12). 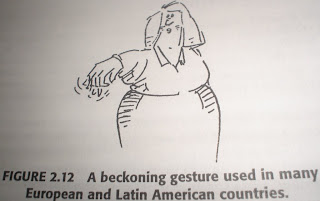 11. Vulcan farewell - is a Jewish priestly benediction, Leonard Nimoy, the Vulcan space alien recalled having seen in synagogues, where its significance is that it resembles the Hebrew letter that is the first letter of a word that represents God's name. 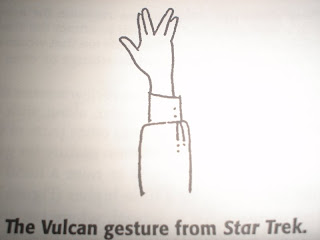 12. In Europe, the customary way to wave "hello" or "goodbye" is with the arm up and extended out, with palm down, and just the hand bobbing up and down at the wrist (Figure 2.8). 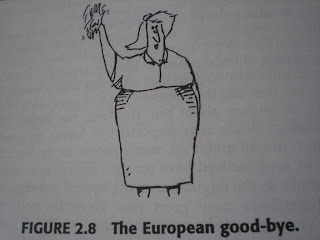 13. Semaphore action - it is the term used to describe how Americans tend to wave goodbye (Figure 2.7). ryliej said…
Thanks for sharing this one, I remember that whistling manner too hehehe
16 July 2009 at 16:51

Lori said…
It's always interesting to learn how other people in other places do things. Appreciate the info.
16 July 2009 at 19:08

Hazel said…
colleen, that sets me thinking it will be funny to recall what you said here when i go travelling
16 July 2009 at 20:42

jeng, Axtell's advice is ask if you're not sure how are things done in the country you are visiting

Anonymous said…
Wow, that is confusing! It's also very interesting though, I especially liked the 'kissing' noises summons for waiters- that's pretty funny!
17 July 2009 at 00:00

Chris said…
very informative and interesting :D thanks so much for this! i learned something new today!
17 July 2009 at 00:14

storyteller said…
How intriguing ;--)
I doubt I'll remember everything, but reading of these differences today definitely feels educational. Thanks for dropping by Small Reflections earlier ;--)
Hugs and blessings,
17 July 2009 at 04:05

Susan Cook said…
Great list, It is amazing the differences in countries.

sabi nila di ba ung paswit is not good, at sa US pag may pumaswit at may lumingon tiyak pinoy un.

The Bumbles said…
Harriet's comment is so funny! I absolutely love the illustrations. The last one for us Americans makes the gesture look extremely silly. Toodles!
18 July 2009 at 09:42

Rims said…
This was a true info-tainment :)

Enjoyed and learned a lot.