The world said goodbye to Michael Jackson on Tuesday. I stayed up til 3 A.M. Bangkok time to watch CNN cover it live. All lights were turned off in my nook. I dealt with my emotions in the dark. As fans at the Staples shouted, "We love you, Michael!," I mentally croaked, "How about resurrect Michael" The two-hour memorial was filled with stirring tributes: all worth the vigil and the zombie state I was in the morning after. Here are 13 snippets I (like to) remember:

1. "He came to us from the Creator, trailing creativity in abundance...we do know we had him and we are the world" ~ Queen Latifah reciting Maya Angelou's We Had Him

3. "He's got a Guinness record for most charity given by a pop star" ~ Kobe Bryant on MJ

5. "There's nothing strange about your Dad. It was strange your Dad had to deal with" ~ Al Sharpton about MJ to Paris, Prince Michael and Blanket 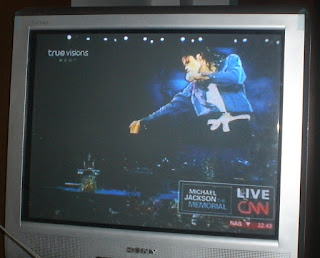 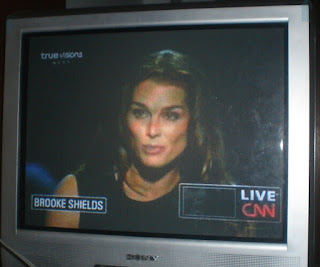 9. "At the end of the day, it is only God's love that will anchor you" ~ The Kings, Bernice and Martin Luther III

11. "Maybe now they will leave you alone" ~ Marlon Jackson to MJ

12. "Let us stop judging people by the color of their skin and the accent of their voice" ~ from the closing prayer of Rev. Lucious Smith

and when Paris spoke, I had my pillow for a giant Kleenex.

Beth said…
i cried too when I heard Paris Jackson speak about her dad. He loves him so much. I can almost feel the loss.

Sandy Kessler said…
I feel someday people will say you know while I was talking pervert and reading the demented media, I missed a very special ambassador of worldly love. His greatness was so much more than an entertainer but the small minds missed it !!
9 July 2009 at 17:08

Americanising Desi said…
in his honor this is great!

Hazel said…
Lol, Anya! I was probably my son's age in his photo on my sidebar and Brooke was already Brooke. The wonders of botox and facelift if she had any. I'm afraid I'm getting some soon myself lol!
9 July 2009 at 21:17

Susan Cook said…
Even my husband cried a little when Paris spoke.

I have something for you HERE

Our Adventures Together/
Her and History
Tasty Exploration
9 July 2009 at 23:43

Carleen said…
Of all the speakers, none moved me to tears like Brooke Shields did. And when I saw Shaheen Jafargholi, whom I had rooted for on Britain's Got Talent, I gave up and cried out loud.
10 July 2009 at 02:39

The Bumbles said…
Missed it all myself but thanks for the recap. I hope his family finds some peace after the circus.
10 July 2009 at 09:18